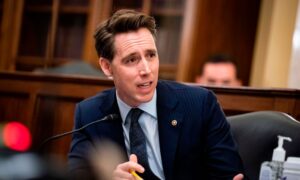 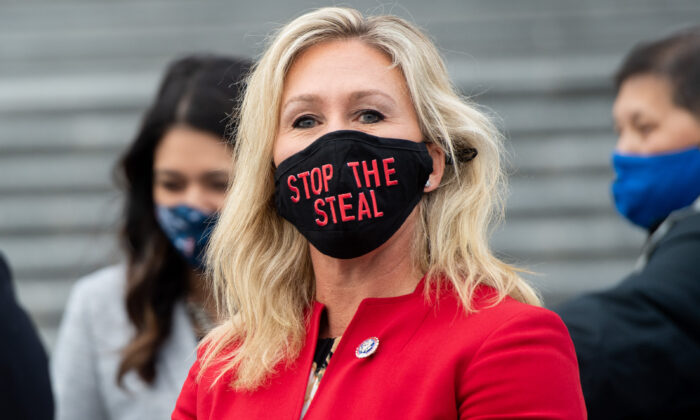 Rep. Marjorie Taylor Greene (R-Ga.) is seen while speaking with fellow first-term Republican members of Congress on the steps of the U.S. Capitol in Washington on Jan. 4, 2021. (Saul Loeb/AFP via Getty Images)
Electoral Vote Count

WASHINGTON—Americans will hopefully be able to hear evidence of voter and election fraud during the joint session of Congress on Jan. 6, Rep. Marjorie Taylor Greene (R-Ga.) told The Epoch Times.

“All the cases have been thrown out based on standing and not on evidence. So I’m hoping that the American people get to hear just a small amount of evidence, because we only have a few minutes in our objections. And I’m hoping that this really opens up the issue,” she said during a pro-President Donald Trump rally on Tuesday.

Greene is one of at least 77 representatives and 13 senators who plan on objecting to electoral votes during the joint session, according to an Epoch Times tally.

The objections, if backed by at least one member of each chamber, trigger separate debates and votes.

Greene noted that numerous people, such as poll workers and observers, have signed affidavits that allege election fraud took place.

“That’s a real sign there’s lots of problems,” she said. There’s also been testimony from experts during hearings by state legislature committees, such as an expert who alleged that he hacked into voting machines, that’s concerning, she added.

“There’s just a lot of evidence that needs to be looked at. And it’s not a political party issue; it’s truly an issue of our election integrity,” Greene said.

Greene is a political newcomer, winning her first bid for Congress and being sworn in on Jan. 3.

Democratic presidential nominee Joe Biden has claimed victory in the 2020 election, pointing to certified vote counts that appear to show him with 306 electoral votes to Trump’s 232. Trump has said the election is not over and Republicans hope to turn it to his favor during the joint session.

Thousands of Trump supporters flowed into Washington on Tuesday and more plan on showing up on Wednesday.

Organizers say the events are meant to pressure Congress into objecting to votes and voting to uphold the objections.

Because Democrats control the House and Senate Republican leadership has come out in opposition to the plan, objections will likely not be upheld.

A second possible path to victory involves Vice President Mike Pence, who some Republicans argue can reject electoral votes in the case of dueling electors in his role as president of the Senate. Seven contested states sent two certificates, one for Biden and one for Trump.

Pence hasn’t indicated whether he will try to reject votes. Pence was in the Oval Office of the White House on Tuesday.

“Our vice president has several options under the U.S. Constitution. He can decertify the results or send them back to the states for change and certification. He can also decertify the illegal and corrupt results and send them to the House of Representatives for the one vote for one state tabulation,” he added.

Biden and his campaign have made little mention of what could happen in the joint session. In a call with reporters late last month, his pick for White House press secretary said they view the session as “merely a formality.” Democrats have said they’re confident Biden will officially be president-elect after the session.

Biden, rallying in Georgia on Tuesday, thanked a crowd on behalf of himself and vice presidential candidate Sen. Kamala Harris (D-Calif.).

“Let me start by saying thank you for electing me and Kamala as president and vice president of the United States,” he said. “You voted in record numbers in November. Your voices were heard. Your votes were counted. And the rule of the people prevailed.”