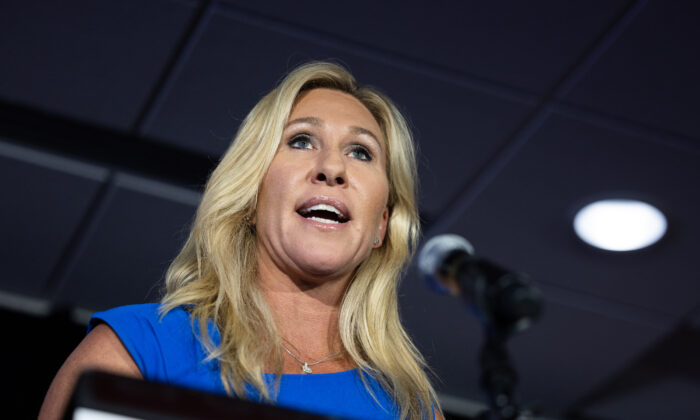 “Attorney General Garland has failed to uphold his oath and has instead overseen a denigration of the principles of our democratic republic by politicizing the Department of Justice, and utilizing the Federal Bureau of Investigations as a Federal police force to punish or intimidate anyone who questions or opposes the current regime,” the resolution reads.

The articles of impeachment state that the attorney general “has taken measures to silence the voice of millions of citizens of the United States by persecuting the former duly elected President of the United States, and potential Presidential candidate, Donald J. Trump.”

On Friday afternoon, Judge Bruce Reinhart unsealed the warrant authorizing the FBI’s search of Mar-a-Lago after the Department of Justice (DOJ) filed a motion the day before to unseal the documents. Trump supported their unsealing.

The warrant revealed that Trump is under investigation for alleged violations of 18 USC 2071—concealment, removal, or mutilation; 18 USC 793 of the Espionage Act—gathering, transmitting, or losing defense information; and 18 USC 1519—destruction, alteration, or falsification of records in federal investigations.

The warrant allowed FBI agents to target their search on “the ’45 Office” and all storage and “all other rooms or areas within the premises used or available to be used by” Trump and his staff “in which boxes or documents could be stored, including all structures or buildings on the estate.”

In a statement obtained by Just The News on Friday, Trump’s office said the 45th president had a “standing order” while he was president that any documents he removed from the Oval Office were deemed to be declassified.

“As we can all relate to, everyone ends up having to bring home their work from time to time. American presidents are no different. President Trump, in order to prepare for work the next day, often took documents including classified documents from the Oval Office to the residence,” the statement reads, according to Just The News.

Under the standing order, these documents “were deemed to be declassified” when the 45th president removed them from the Oval Office, according to the statement.

“The power to classify and declassify documents rests solely with the President of the United States,” the statement added. “The idea that some paper pushing bureaucrat, with classification authority delegated by the president, needs to approve of declassification is absurd.”

“Number one, it was all declassified. Number two, they didn’t need to ‘seize’ anything. They could have had it anytime they wanted to without playing politics and breaking into Mar-a-Lago,” Trump said in a statement.

The former president said the documents were securely stored “as per their request.” He added: “The bigger problem is, what are they going to do with the 33 million pages of documents, many of which are classified, that President Obama took to Chicago?”

The National Archives and Records Administration (NARA) responded on Friday to Trump’s remarks about Obama’s records.

“NARA moved approximately 30 million pages of unclassified records to a NARA facility in the Chicago area where they are maintained exclusively by NARA,” NARA said in a statement. “Additionally, NARA maintains the classified Obama Presidential records in a NARA facility in the Washington, DC, area. As required by the [Presidential Records Act], former President Obama has no control over where and how NARA stores the Presidential records of his Administration.”

The Epoch Times has contacted the DOJ for comment.

This article was updated to include a statement from NARA.