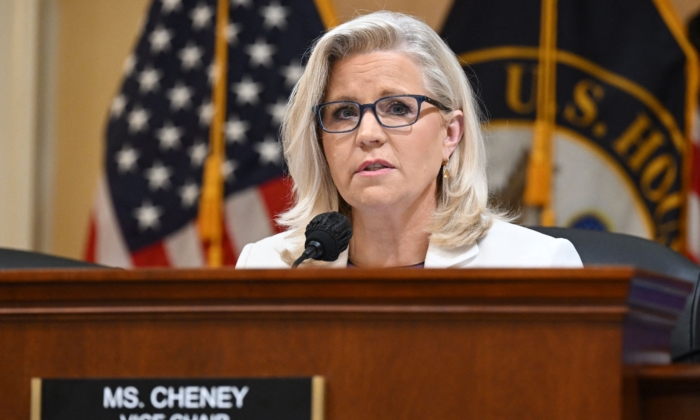 Rep. Liz Cheney (R-Wyo.) delivers a closing statement during a hearing by the House Select Committee to investigate the Jan. 6, 2021, U.S. Capitol breach, in the Cannon House Office Building in Washington, DC, on July 21, 2022. (Saul Loeb/AFP via Getty Images)
Republicans

Rep. Liz Cheney (R-Wyo.) said she likes working with the Democrats in Congress more than the Republicans, though she reiterates she won’t leave the GOP.

In an interview with the New York Times published on Aug. 7, Cheney, the vice chair of the House Jan. 6 committee, said she’s not interested in switching parties.

The GOP “is continuing to drive itself in a ditch, and I think it’s going to take several cycles if it can be healed,” Cheney said during the interview at a house party on Aug. 4.

Cheney noted she would prefer working with Democrat congresswomen rather than Republican ones.

“I would much rather serve with Mikie Sherrill and Chrissy Houlahan and Elissa Slotkin than Marjorie Taylor Greene and Lauren Boebert, even though on substance certainly I have big disagreements with the Democratic women I just mentioned,” Cheney said, according to the report. “But they love this country, they do their homework and they are people that are trying to do the right thing for the country.”

Cheney—one of the only two Republicans serving on the committee investigating the Jan. 6 breach of the U.S. Capitol—has been vocal in her criticism of former President Donald Trump and voted to impeach him in his second trial. The move prompted the Wyoming Republican Party last year to censure her before deciding to stop recognizing her as one of its members.

As for her own potential presidential bid, the Wyoming lawmaker said she would focus on her primary and the work on the Jan. 6 committee.

“I think that Ron DeSantis has lined himself up almost entirely with Donald Trump, and I think that’s very dangerous,” Cheney said.

There has been speculation that Cheney could run for president in 2024, which she has left her door open. In an interview with CNN on July 24, when asked whether she was willing to run for president to prevent Trump from winning the presidency again, she reiterated she hasn’t decided yet, but would make a decision “down the road.”

The Wyoming lawmaker is facing tough battles in the upcoming Aug. 16 Republican primary against Harriet Hageman, a challenger endorsed by Trump.

A recent poll in the Casper Star-Tribune shows Cheney’s support is at 30 percent, trailing significantly behind Hageman, who received 52 percent support. No other candidates in Wyoming have over 5 percent support.

The three-term Republican congresswoman has already turned to the Democrats for help. On her campaign’s website, a newly added question and answer section that includes instructions on how to change party affiliation in order to vote for her.