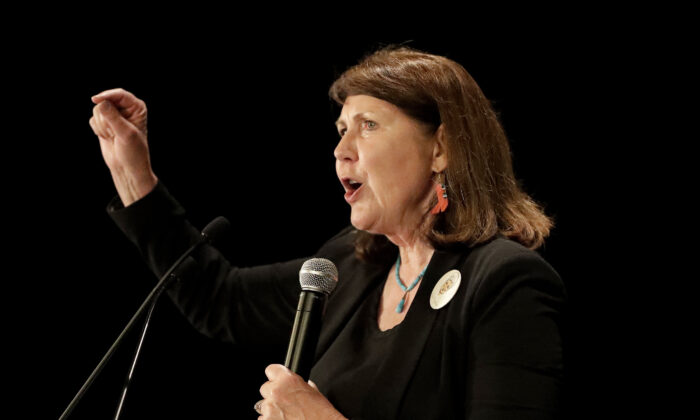 IN this Nov. 8, 2016 file photo, Democratic senatorial candidate U.S. Rep. Ann Kirkpatrick (D-Ariz.) speaks to supporters during an election night party in Phoenix. Kirkpatrick said Wednesday, Jan. 15, 2020, that she's taking time off from her congressional duties to seek treatment for alcohol dependence after a “serious” fall. Kirkpatrick said she's “finally seeking this help after struggling to do so in the past." (Matt York/AP Photo)
Politics

Rep. Ann Kirkpatrick (D-Ariz.) said she’s taking time off from her duties as a U.S. representative to get treatment for alcoholism.

Kirkpatrick made the announcement Jan. 15 after saying recently she had a “serious” fall.

“I sincerely thank the many people who have reached out in support after my accident last week. The fall was serious, but with physical therapy I will fully recover. I do, however, have another challenge I must face, which was the underlying cause of my fall. Beginning next week, I will receive treatment that I have struggled to ask for, to treat my alcohol dependence,” she said in a statement.

Kirkpatrick, 69, said that she is “finally seeking this help” for the disease.

“I know I must get better” in order to serve as a member of Congress and be a wife, mother, and grandmother, she added.

“With humility, I share this news with you. Throughout my time in public service, I have always said that you may not agree with me but you will know where i stand. I will continue to honor that commitment to transparency and communication,” she said.

While Kirkpatrick is absent from her duties, her congressional offices in Washington and Arizona will be fully operational.

Kirkpatrick did not say how long she’ll be in treatment. She already missed the vote on Wednesday to submit the articles of impeachment against President Donald Trump to the Senate. She indicated in the statement that she wants to keep her position. The next election is in November.

Kirkpatrick has been in the House for four terms, winning a new seat in 2018 after redistricting. She won in Arizona’s 2nd Congressional District by about 28,000 votes over Republican Lea Marquez-Peterson.

A slew of candidates are vying for the seat in 2020, including two Democrats and six Republicans. The district went for Democrat Hillary Clinton in 2016 by 4.8 percentage points.

Rep. Tom O’Halleran (D-Ariz.), who holds Kirkpatrick’s old seat, said in a statement that Kirkpatrick “has always been a dedicated public servant.”

“wish her well as she tackles this next fight, and am keeping her in my thoughts today. Asking for help is hard, but Ann has always been stronger than most,” he added.

.@RepKirkpatrick is a dear friend and has always been a dedicated public servant. I wish her well as she tackles this next fight, and am keeping her in my thoughts today. Asking for help is hard, but Ann has always been stronger than most. #AZ01

McCain’s widow, Cindy McCain, said in a statement that she was “sending lots of support and friendship to @RepKirkpatrick.”