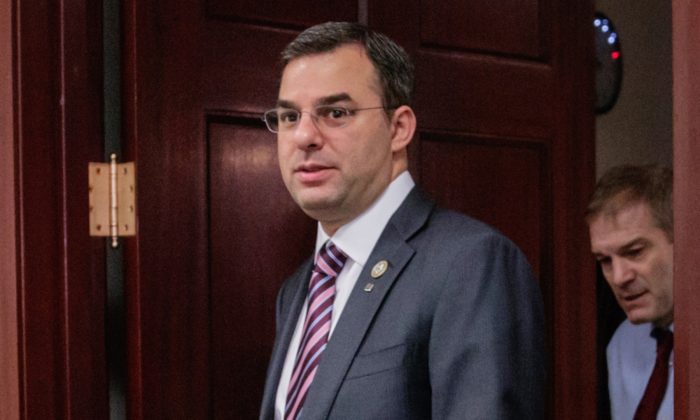 Amash said in an op-ed published in the openly anti-Trump Washington Post that he grew up in a Republican household noting his father, a refugee from Palestine, and his mother, another immigrant, were both Republicans.

“The Republican Party, I believed, stood for limited government, economic freedom and individual liberty—principles that had made the American Dream possible for my family,” he wrote.

“In recent years, though, I’ve become disenchanted with party politics and frightened by what I see from it. The two-party system has evolved into an existential threat to American principles and institutions.”

Amash said that he’s seen government officials of both parties “act in obedience or opposition to the president and their colleagues on a partisan basis.”

“In this hyperpartisan environment, congressional leaders use every tool to compel party members to stick with the team, dangling chairmanships, committee assignments, bill sponsorships, endorsements, and campaign resources,” he added.

Amash said that he was leaving the Republican party and will now be an independent. The only other independent in Congress at present is Sen. Bernie Sanders, a socialist who is running for president in the Democratic primary.

Amash, who did not mention Trump by name in the opinion piece, said that he hopes Americans will honor his decision.

“No matter your circumstance, I’m asking you to join me in rejecting the partisan loyalties and rhetoric that divide and dehumanize us. I’m asking you to believe that we can do better than this two-party system—and to work toward it. If we continue to take America for granted, we will lose it,” he wrote.

While special counsel Robert Mueller couldn’t establish cooperation or conspiracy between Trump’s campaign and Russian actors, Mueller focused on possible obstruction by Trump, writing in his team’s report that it could not exonerate Trump.

Attorney General William Barr, his boss, said the decision was unusual for a prosecutor and that the evidence presented by Mueller wasn’t sufficient to establish obstruction.

Amash was the only Republican to join some Democrats in claiming the report laid out conduct by Trump that was impeachable. Trump said in response: “How do you obstruct when there is no crime and, in fact, the crimes were committed by the other side?”

After Amash took the position in May, he lost the backing of the wealthy DeVos family. The House Freedom Caucus voted to condemn Amash and the Michigan Congressman later left the group.

A number of Republican challengers emerged after Amash’s impeachment call, including state Rep. Jim Lower, who described himself as “pro-Trump,” and U.S. Army veteran Peter Meijer, the grandson of deceased retailer Fred Meijer.

“I served my country and now I want to serve my community. I’m running for Congress because our politicians spend their time trashing each other online, coming up with excuses and pointing fingers. We should expect more from the people who represent us,” Meijer said in his announcement video, released on July 3.

“I have a lot of ideas to take to Washington. We need to secure our borders, we need to bring our troops home from senseless wars, and we need health care to not bankrupt families. And education should be within reach.”

While some challengers have directly targeted Amash, Meijer, 31, did not mention him by name.