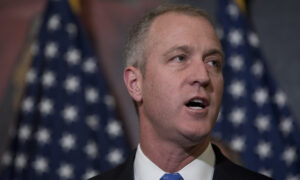 Manufacturing can be relocated to Latin America in lieu of the United States as a way to speed up the process of decoupling from China, Rep. Mark Green (R-Tenn.) says.

Green was recently named the ranking member of the Western Hemisphere Subcommittee in the House of Representatives.

“So, as as I contemplate what’s going on in Latin America, because of China’s commodity boom—they came in and got the oil and the metals—I realized that that created currency issues over the last 15 years for South America, Central America. And because their currency suddenly became very valuable to the Chinese, it became very inexpensive for them to buy Chinese manufactured goods,” Green told The Epoch Times’ “American Thought Leaders” program.

“So instead of developing their own manufacturing base, they bought stuff from China. And that’s hurt their employment in the manufacturing sector in Latin America, Central America,” said Green, who spoke on the sidelines of the Conservative Political Action Conference in Florida over the weekend.

With the increasing recognition during the COVID-19 pandemic that the United States should decouple or pare its dependency on China-based manufacturing, the Latin America situation presents an opportunity, Green says.

“We can use and direct some of the development dollars to Latin America to increase manufacturing there. Companies—especially American companies—that their business model doesn’t support them coming back to America for the cost of labor, let’s send them to Latin America. We’ll create a manufacturing base that will create jobs there, which will work with our immigration issue, and help our immigration; whenever you create jobs in Latin America, you decrease the flow across our southern border,” he said.

“So this is a win-win-win. Decoupling from China, helping our friends to the south, and helping our southern border immigration issue.”

Several Democrats have indicated their support for that viewpoint, Green said, adding that he hopes to bring up the issue on the House floor.

Green has also worked on legislation that would fully fund a U.S.-based company returning operations to the United States by allowing firms a tax write-off for the cost of the move.

“There are also a lot of other things we have to do and in that national security manufacturing piece, but that’s one of my bills,” he said.

In a letter last year to congressional leadership, Green urged them to include incentives for U.S. companies to reshore from China.

“We should temporarily allow American companies that move back from China to expense 100% of the moving costs. And, while, I’m personally no fan of tariffs, we should pay for it with the existing tariffs President Trump levied on China, as long as they remain. The American people have suffered enough—and the American taxpayer has paid enough—for a virus they had no part in causing. It’s time to let China pay for it,” he said.