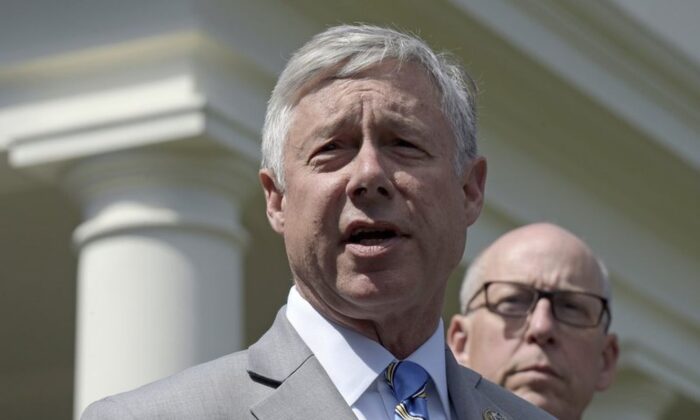 Rep. Fred Upton Not Sure If He’ll Run Again

Rep. Fred Upton (R-Mich.), one of a minority of Republicans in the House of Representatives who voted last year to impeach then-President Donald Trump, said Sunday he’s not sure if he’ll run for another term.

“We don’t know what our districts look like yet,” Upton said on CNN’s “State of the Union.”

“We’re in the midst of looking at maps. Michigan loses a seat. We will evaluate everything probably before the end of the year in terms of making our own decision. We have never made a decision more than a year out,” he added.

Upton, 68, has represented Michigan’s 6th Congressional District since 1993 and has been in office since 1987.

Two Republicans who voted to impeach Trump have already announced they will leave office at the end of the current Congress.

Rep. Anthony Gonzalez (R-Ohio) said that the decision stemmed from family matters but also said the “current state of our politics, especially many of the toxic dynamics inside our own party,” played a factor. Rep. Adam Kinzinger (R-Ill.) cited what he described as political parties that have moved towards “appealing to the most motivated and the most extreme elements within” them.

Trump weighed in over the weekend against Upton and other GOP members who joined with Democrats to impeach him, urging “patriots” to launch primary campaigns against them.

“You will have my backing!” he wrote.

Carra, 32, told a group during his campaign launch that Upton “has been in politics longer than I’ve been alive.”

“The time has come,” he said, adding, “I think we’ve had more than enough of politics as usual.”

Gonzalez, meanwhile, defended his impeachment vote on the same CNN show Sunday, saying he was “deeply sad to come to the conclusion that I did and to feel like I could no longer trust the president of the United States, even for a few days, to be the commander in chief of our military.”

Trump was ultimately acquitted by the Senate, though seven Republicans in the upper chamber voted to convict him.

Trump has toyed with launching a 2024 presidential bid but has said he will not formally announce his decision until after the 2022 midterm elections.

Republicans hope to flip both chambers in the upcoming elections. The party is down eight seats in the lower chamber. In the Senate, there’s a 50-50 split, but Democrats control it through the tiebreaking vote Vice President Kamala Harris can cast as president of the body.