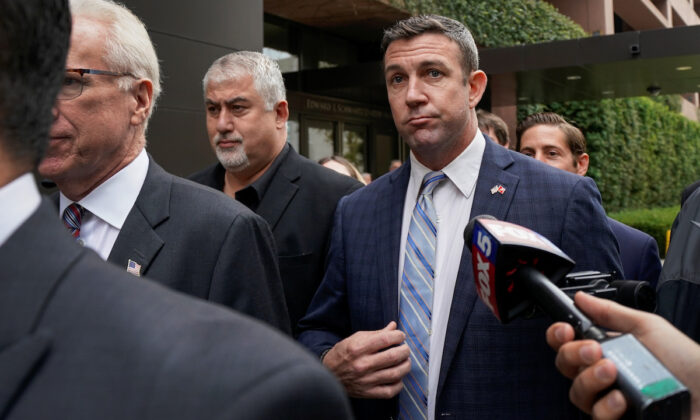 Rep. Duncan Hunter Says He Will Resign Soon: ‘It Has Been an Honor to Serve’

Rep. Duncan Hunter (R-Calif.) said he will resign in the near future after he entered a guilty plea to misusing campaign funds.

“Shortly after the Holidays, I will resign from Congress. It has been an honor to serve the people of California’s 50th District, and I greatly appreciate the trust they have put in me over these last 11 years,” he said in a statement on Friday, reported local San Diego station 10 News.

He faces a potential five-year prison term and a $250,000 fine when he is sentenced in March of next year.

Earlier this week, Hunter said he would enter the plea for the sake of his family. His wife and former campaign treasurer, Margaret, already admitted to her role in the scandal and also faces a five-year prison term and a $250,000 fine.

Hunter pleaded guilty to one of the 60 counts against him, according to KUSI News.

“No. 1, not a single dime of taxpayer money is involved in this. The plea that I accepted was misuse of my own campaign funds, of which I pled guilty to only one count. I think it’s important that people know that I did make mistakes,” Hunter told the local California news station.

He added, “Whatever my time in custody is, I will take that hit. My only hope is that the judge does not sentence my wife to jail. I think my kids need a mom in the home.”

But despite his legal problems, Hunter was able to get re-elected last year.

Democrat Ammar Campa-Najjar and Republicans Darrell Issa and Carl DeMaio are among the candidates who are vying for his seat.

In reaction to Hunter’s decision on Monday, DeMaio told 10 News, “While this must have been a tough decision for him, Congressman Hunter’s decision to plead guilty is the right one for his family and his constituents and shows that no one should be above the law—especially Members of Congress. My thoughts and prayers are with the Hunter family as they go through this difficult process.”

“Hunter was the main reason the seat was at risk, and his exit improves the GOP’s odds of holding his inland San Diego seat President Trump carried 55 percent to 40 percent in 2016,” it wrote.