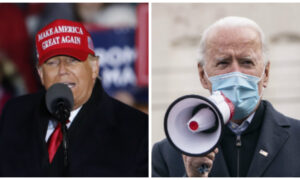 “I have concern now that this investigation will be squashed,” Nunes, the ranking member on the House Intelligence Committee, told Fox News. “So, we’re probably going to have to look at—and I will talk to my colleagues in the Senate and the House—this probably needs to be a special counsel, similar to like we now have a special counsel with Durham, that is going to continue to look at the Russia hoax.”

U.S. Attorney John Durham was tapped by Attorney General William Barr in 2019 to investigate the origins of the FBI’s Russia inquiry. So far, only Kevin Clinesmith has been convicted.

Meanwhile, former Vice President Joe Biden’s team sent out a statement from Hunter Biden saying he is under investigation over his “tax affairs.”

“I learned yesterday for the first time that the U.S. Attorney’s Office in Delaware advised my legal counsel, also yesterday, that they are investigating my tax affairs,” the younger Biden said in a Dec. 9 statement. “I take this matter very seriously but I am confident that a professional and objective review of these matters will demonstrate that I handled my affairs legally and appropriately, including with the benefit of professional tax advisers.”

Joe Biden’s team said he is “deeply proud of his son, who has fought through difficult challenges, including the vicious personal attacks of recent months, only to emerge stronger.” The nature of the investigation wasn’t disclosed by either Biden.

Nunes told Fox News that the investigation is “very murky” although he’s “glad they’re investigating it, but we have to hold them accountable.”

On Nov. 18, Sens. Chuck Grassley (R-Iowa) and Ron Johnson (R-Wis.) released more details about Hunter Biden’s overseas business deals, along with alleged links to foreign individuals who have ties to the CCP and the Russian government.

“Some of the additional findings from their investigation include millions of dollars sent from a Shanghai-based company with links to CEFC, which was effectively an extension of the communist Chinese government, to a close business associate of Hunter Biden,” they stated. CEFC is a firm founded by billionaire Ye Jianming, who is believed to have ties to the CCP.

They cited a Fox News interview with a former Biden family business associate, Tony Bobulinski—the CEO of a former joint venture between James Biden, Hunter Biden, and two others. Bobulinski told Fox News that he’s concerned the Bidens “are compromised” by the CCP.

“Obviously, I’ve referenced I’ve held a Q-clearance—you’re briefed on compromise and who you’re able to talk with and deal and do business with—and I just don’t see, given the history here and the facts, how Joe can’t be influenced in some manner based on the history that they have with CEFC,” he said.