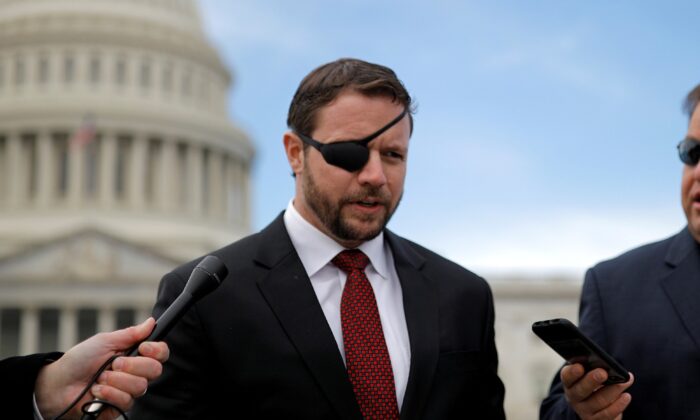 Rep.-elect Dan Crenshaw (R-Texas) talks with reporters as he arrives for a class photo with incoming newly elected members of the House of Representatives on Capitol Hill in Washington, on Nov. 14, 2018. (Carlos Barria/Reuters)
Cancel Culture

Rep. Dan Crenshaw (R-Texas), who has been outspoken about the left’s effort to cancel traditional American culture, recently debuted a children’s book—a story that warns about the impact of cancel culture.

Crenshaw’s book is the latest in a series by Brave Books that taps the talent of well-known conservatives with the goal of “empowering this generation’s youth with conservative values,” an effort to counter the pervasive progressive ideologies that currently dominate all aspects of American culture from entertainment to school curriculum.

Crenshaw’s book, “Fame, Blame, and the Raft of Shame” attempts to fill a need for books that have a traditional message and honor the United States.

The Texas congressman said that writing a children’s book on cancel culture was “kind of tricky.”

“I think conservatives wrongly view cancel culture as a very simple question of either being able to say whatever the hell you want or being silenced,” said Crenshaw. “It is not that simple, and I wanted to craft this story that kind of exposes the nuance of what we mean by cancel culture.”

While the book is primarily aimed at children, it can inform people of all ages about the radical left’s effort to replace traditional culture with progressive ideas and what happens to those who disagree with the group’s thinking.

The setting for the book is an underwater city enveloped in a dome of seaweed, which starts to crack as characters are banished from the city for a variety of things that go against the majority’s rules and are cast out on a “raft of shame.”

The book also contains suggestions from Crenshaw elaborating on the principles outlined:

“Kindness without truth can lead to naivete and lack of preparedness for the future (example, participation trophies). Truth without kindness can lead to demoralization (example, “Your performance was terrible. Are you even trying?”). Good communication has a proper balance of truth and kindness (example, “You lost this time, but I bet you’ll work even harder and win it next time!”)”

Crenshaw is drawing from his own experience of being targeted by cancel culture and his journey of countering the attacks with forgiveness. He said he drew from his own faith when crafting the story.

“Faith is about grace, right? Showing grace even in the face of your enemies. That’s also the very clear message of forgiveness. The Bible is full of stories that help us on that path,” he added. “And so, it will always be useful in that regard, I think.”

The Texas lawmaker has repeatedly warned about the destructive effects of the progressive left’s use of cancel culture, saying its ultimate goal is to destroy America.

“See we tried to warn our liberal friends, we tried to tell them that decades of identity politics and increasing flirtation with Marxist revolutionary ideology would lead here,” Crenshaw said in a 2020 video Facebook post.

The video was published when protests began in May 2020 in the name of “social and racial justice.” During that time, when cities were burned and statues of heroes from American history were toppled, Crenshaw issued a hopeful message about standing up to hate and facing the “mob.”

“But here’s the thing. It’s not too late, it’s never too late—not as long as any good and decent people remain standing. In fact, I happen to believe there are a lot of us, a lot of Americans, who love our country, believe in its great and timeless ideals, and aren’t going to let a Marxist mob tear it apart,” said Crenshaw.

“You have to demand the corporate CEOs stop giving in to the mob, and that our teachers start teaching the right story about America.”