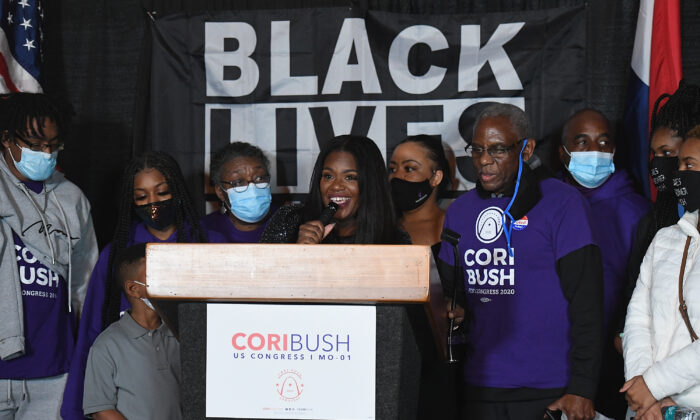 Congresswoman Cori Bush speaks during her election-night watch party on November 3, 2020 at campaign headquarters in St. Louis, Missouri. With tonight's victory, the Democrat Bush becomes the first African-American woman to be elected to Congress from the state of Missouri. (Photo by Michael B. Thomas/Getty Images)
Crime and Incidents

After a vehicle belonging to “Squad” member Rep. Cori Bush (D-Mo.) was recently hit by gunfire, the lawmaker confirmed she was unharmed.

Bush wrote on Twitter on Thursday: “I’m touched by everyone who has reached out. Thankfully no one was harmed.”

The Democrat lawmaker then added that “any act of gun violence shakes your soul” and then claimed “that’s why our movement is working to invest in our communities, eradicate the root causes of gun violence, and keep everyone safe.”

Bush was not in the parked car when the gunfire struck it Saturday morning in the St. Louis area, her office told local media outlets. She is not believed to have been targeted during the incident, according to local reports.

The location of where the shots were fired is not clear.

Bush has drawn criticism from Republicans for her support of the “defund the police” movement that erupted in 2020, while she also confirmed that she hired private security after allegedly receiving death threats during her time in Congress. Filings with the Federal Elections Commission (FEC) filings show her campaign spent more than $54,000 on security between April 15 and June 28 of last year.

In response to the criticism, Bush said her intention is not to remove funds from police departments but instead, she wants to redirect the money to social services programs.

Meanwhile, in late December, Rep. Mary Gay Scanlon (D-Pa.) was carjacked at gunpoint in Philadelphia, according to her office. A suspect, 19-year-old Josiah Brown of Delaware, was arrested in connection with the incident, police said.

Around the same time, Illinois’ Democratic state Senate majority leader Sen. Kimberly Lightford and her husband were carjacked in Chicago.

Authorities told CBS Chicago in late December that the couple was approached by three masked individuals as Lightford and her husband were driving a Mercedes SUV. The carjackers fired shots during the incident, said officials at the time.

The Epoch Times has contacted Bush’s office for comment.