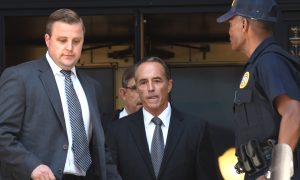 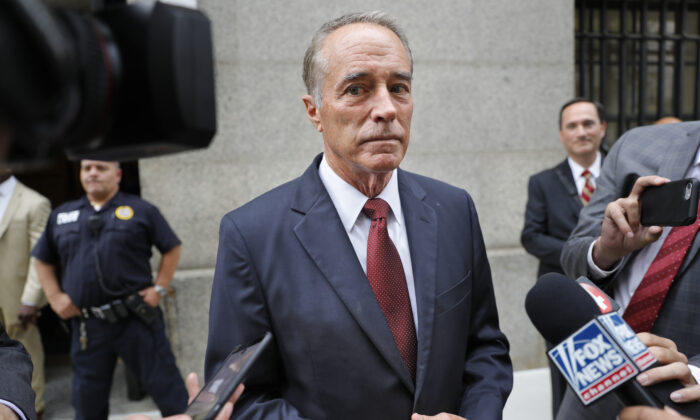 Rep. Chris Collins, R-N.Y., speaks to reporters as he leaves the courthouse after a pretrial hearing in his insider-trading case, in New York on Sept. 12, 2019. (Seth Wenig/AP Photo)
Politics

Rep. Chris Collins (R-N.Y.) resigned from his congressional seat on Sept. 30 one day before he was expected to plead guilty in an insider trading case.

Collins submitted a resignation letter Monday, according to a spokesman for House Speaker Nancy Pelosi (D-Calif.). It will take effect when Congress meets in a brief session on Tuesday.

A federal judge in Manhattan scheduled a hearing for Collins to enter a guilty plea to unspecified charges in the case Tuesday afternoon. A similar hearing has been scheduled Thursday for the congressman’s son, Cameron Collins.

Collins’s congressional office declined to comment on Monday. Neither Collins nor anyone representing him, such as a spokesperson, has commented on the resignation or scheduled guilty plea; his attorney didn’t immediately respond to a message. The U.S. attorney’s office in Manhattan also declined to comment.

Collins had been scheduled to go to trial next year on charges of conspiracy, securities fraud, wire fraud, and making false statements to the FBI. Prosecutors accused him of sharing non-public information from a biopharmaceutical company with his son, allowing Cameron Collins and another man to avoid nearly $800,000 in stock losses.

The case, filed in August of 2018, initially caused the 69-year-old Collins to drop a re-election bid, though he denied any wrongdoing and called the charges “meritless.”

But he restarted his campaign a month later as Republican leaders were deliberating who would replace him on the ballot.

At the time he said the “stakes are too high to allow the radical left to take control of this seat in Congress.”

Collins and his son both pleaded not guilty on Sept. 12. Collins said at the time he wasn’t sure he’d run for the congressional seat again in 2020.

“I have not decided if I’m gonna run for re-election,” he said, reported the New York Post. “I can tell you, I’m confident if I do, I will win.”

Collins’s seat is not up for grabs by Democrats, according to political analysts. In fact, his resignation probably cements the seat as a Republican one.

Rating change: indicted Rep. Chris Collins (R)’s resignation moves #NY27 from Lean R to Solid R at @CookPolitical. Collins was the only reason this Trump +24 seat was ever in play.

Crystal Ball rating of NY-27 remains Likely Republican after Rep. Chris Collins resigns. Special election adds a bit of uncertainty but overall the Rs are better off with him gone.

“Collins was the only reason this Trump +24 seat was ever in play,” he added, referring to President Donald Trump winning the district by 24 percentage points in the 2016 presidential election.

“Special election adds a bit of uncertainty but overall the Rs are better off with him gone,” wrote Kyle Kondik, managing editor of the University of Virginia’s Center for Politics, which operates the Crystal Ball.

Three Republicans have announced they’re running for the seat: Christopher Jacobs, a state senator; Robert Ortt, a former mayor, city treasurer, and city clerk of the town of North Tonawanda; and Beth Parlato, an attorney.

One Democrat, who lost in his bid for the seat in the 2018 midterms, is trying again.