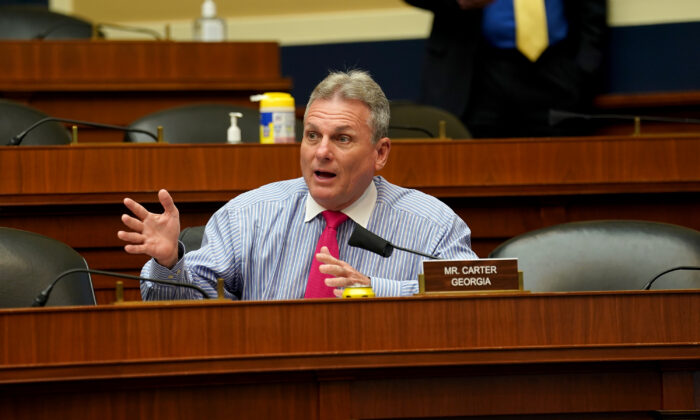 Rep. Buddy Carter (R-Ga.) said over the weekend that while the COVID-19 vaccines are safe and effective, vaccine mandates violate rights laid out in the U.S. Constitution.

“The mandates are unconstitutional. And we are going to be taking that to the courts if we need to, if they don’t stop them,” Carter said on NTD’s “Capitol Report.”

President Joe Biden and top administration officials have imposed a slew of mandates in recent months, including a mandate for health care workers at any facility that accepts money from Medicare or Medicaid.

The mandates have drawn court challenges; some have been paused, but none have been permanently struck down.

Carter and Rep. Diana Harshbarger (R-Tenn.), who are both pharmacists, last month introduced a bill that would block the federal government from forcing workers to get a COVID-19 vaccine. With Republicans in the minority, though, it’s unlikely to pass, as Democrats largely support the mandates.

Carter told NTD that he believes the vaccines are safe and effective, and that he’s already received a booster shot.

The congressman noted that Biden late last year promised vaccination wouldn’t become mandatory during his administration, only to impose mandates on over 100 million federal and private employees.

“Now all of a sudden, they decided they are going to mandate it. It’s inconsistent, it’s unconstitutional, and it’s un-American,” Carter said.

Biden and officials in his administration have said the mandates fall within the power of the federal government, saying the one imposed on private employers, which is blocked for now by a federal court, is allowed under the Occupational Safety and Health Act.

Carter said the question being asked is whether people are vaccinated, when it should be whether they are immune, which would take into account persons who haven’t received a shot but have natural immunity. He also decried how some jurisdictions are already moving toward mandates for children.

“I’m hearing from parents; when they’re calling the office, I’m talking to them. And they’re telling me, ‘Look, first of all, this is not a childhood disease. It doesn’t impact children,'” he said.

“I will tell you that this is going to … this is really going to cause a lot of problems if they do mandate it in children, and it appears to be that they are headed down that road right now.”