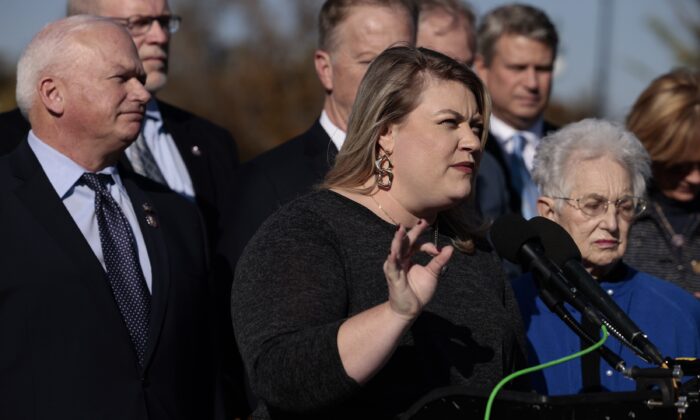 “Roe v. Wade came at a time when the science wasn’t reflective of the fact that life begins at conception. Today, we know that to be true. And we know that the child in the womb can feel pain. We have science on our side,” Cammack said during an interview with NTD’s “Capitol Report” over the weekend.

In Roe v. Wade, justices ruled abortion a constitutional right and barred states from curtailing abortion access before a fetus becomes viable for life outside the womb. A follow-up ruling from the court in 1992 held that states can’t impose significant restrictions on abortion before fetal viability.

Since then, advances in science have allowed babies to survive outside the womb with medical help at much less than a 40-week full term—a 21-week-old baby survived in Alabama after being born prematurely. More experts have said recently that human life begins at conception, while a growing body of evidence also indicates that unborn children younger than 24 weeks old can feel pain, researchers said last year.

Roe v. Wade is being challenged by the state of Mississippi; justices heard oral arguments last week from Mississippi officials and lawyers for Jackson Women’s Health Organization, an abortion clinic in the state.

There’s been “30 years of advancements in medicine, science,” including advancements “in knowledge and concern about such things as fetal pain, what we know the child is doing and looks like and is fully human from a very early [stage],” Mississippi Solicitor General Scott Stewart told the court.

Justice Sonia Sotomayor, an Obama nominee, disagreed, claiming that “a small fringe of doctors believe that pain could be experienced” before children in the womb develop cortexes.

A decision in the case isn’t expected until next year.

“Why is it that we classify bacteria on Mars as life, but not a child in the womb that has its own DNA, that has an entire nervous system, and functioning organs? When the DOJ takes up a case that is a pregnant woman who has been murdered, it’s classified as a double homicide. So in so many ways, they want to recognize a child in the womb, but only when it’s convenient,” Cammack said.

“This landmark case Dobbs v. Jackson, this is going to, I think, be the turning point where we really stand up as a nation and say that we recognize that that tiny baby in the womb, with its own DNA, as an individual, has the same inalienable rights that every American has to life, liberty, and pursuit of happiness.”

For Cammack, a first-term congresswoman who is the youngest Republican woman in the House, the issue is deeply personal. Her mother suffered a stroke when she was 27 and was told she would never be able to have children safely in the future.

She became pregnant and doctors warned her against continuing the pregnancy.

“The doctors told her, ‘You’re not going to be able to carry this baby to term. It’ll certainly die. And it’ll probably kill you in the process.’ And so that obviously scared her,” Cammack said.

“When she told her family, eventually they also encouraged her, ‘You need to abort this child, because you won’t survive, the child won’t survive.’ And against all odds, no support from family, she chose life. And she delivered an eight-pound, six-ounce, healthy baby girl.”