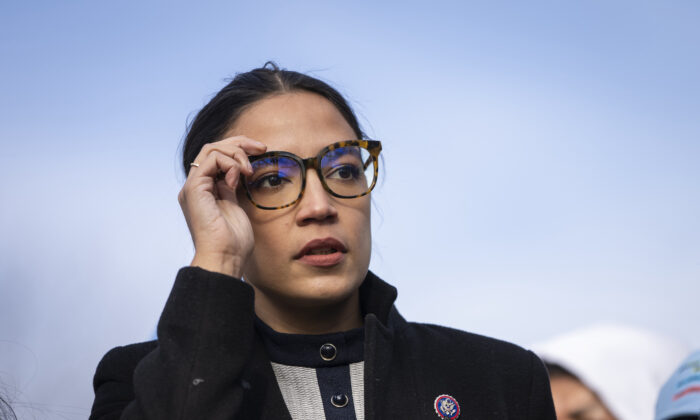 Rep. Alexandria Ocasio-Cortez (D-N.Y.) prepares to speak during a rally outside the U.S. Capitol in Washington on Dec. 7, 2021. (Drew Angerer/Getty Images)
High-profile cases

Rep. Alexandria Ocasio-Cortez (D-N.Y.) has tested positive for COVID-19, her office has said in a statement on Sunday night.

“She is experiencing symptoms and recovering at home,” it said briefly of the breakthrough case while encouraging “everyone” to get a booster and follow guidance from the Centers for Disease Control and Prevention (CDC) on minimizing the spread and infection risk of the virus.

It added that the congresswoman received a COVID-19 vaccine booster in the fall.

Ocasio-Cortez’s infection comes as the Omicron variant is sweeping the country and the world.

The Omicron variant, which was discovered in southern Africa in November, is now the dominant strain contributing to new COVID-19 infections across the United States, according to CDC data. The variant has supplanted the previously dominant Delta variant, accounting for more than 95 percent of all cases as of last week.

However, according to mounting evidence, Omicron appears to cause milder illness than previous variants.

Several hospital doctors around the United States told The Associated Press in a report published on Wednesday that many COVID-19 cases requiring hospitalization were sent to hospital due to conditions other than the virus.

New York Governor Kathy Hochul told a briefing on Friday that in her state, 42 percent of patients hospitalized with COVID-19 were admitted for other reasons—a sign of how raw case numbers in hospital may not be giving the clearest picture of Omicron’s impact in terms of severe disease.

While hospitalizations continue to rise in New York, Hochul and other state officials expressed optimism that the worst of the Omicron wave could pass in the coming days.

“We need a couple more days to be able to tell that it has peaked,” said Dr. Mary Bassett, New York’s acting Health Commissioner. “I think that we can expect a difficult January but that things should be much better by February.”