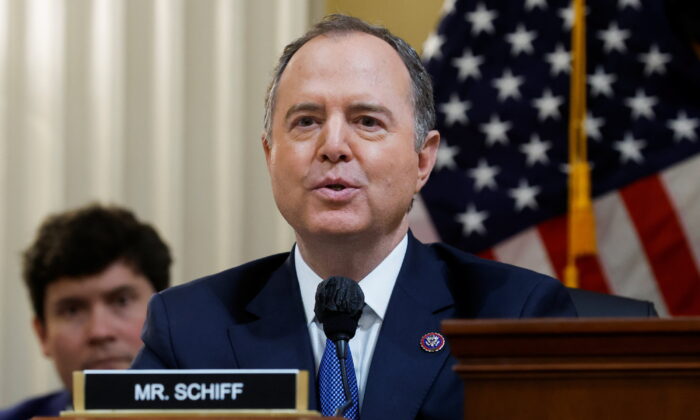 Outgoing House Intelligence Chairman Adam Schiff (D-Calif.) said the Jan. 6 committee will have to “scrub” some evidence from its final report before Republicans take over the house in 2023.

During an appearance on CNN’s “State of the Union” on Nov. 27, Schiff was asked by anchor Dana Bash about Rep. Jim Jordan (R-Ohio) becoming chairman of the powerful House Judiciary Committee and about the fact that Jordan will “go through the evidence you left out … you’re saying that there won’t be evidence that will not be made public?”

“The evidence will all be made public,” Schiff told Bash in response. “Now, we will have to make sure that we scrub that evidence for personally identifiable information, that the evidence that we provide protects people’s security, it doesn’t put them at risk. So there are things that we’re going to have to do along those lines.”

“One former staffer told The Washington Post that people working for the committee became … ‘discouraged’ when they felt it had become a … ‘Cheney 2024 campaign,'” Bash told Schiff. “Is that fair?”

Schiff responded, “I have never viewed it that way. And I think her role on the committee has been indispensable. I have tremendous respect for her and for Adam Kinzinger.”

He was referring to outgoing Rep. Adam Kinzinger (R-Ill.), who, like Cheney, is a Republican critic of Trump.

Republicans and Trump say that the House Jan. 6 committee, which is dominated by Democrats, lacks credibility and is a partisan attempt to wound the former president.

Rep. Troy Nehls (R-Texas) told The Epoch Times the week of Nov. 20 that the Jan. 6 committee is an attempt to harm Trump’s presidential bid in 2024.

Elsewhere in his interview, Schiff declined to say whether he would comply with a House Republican subpoena when the Republicans take control.

“We’ll have to consider the validity of the subpoena,” he said. “But I would certainly view my obligation, administration’s obligation to follow the law. And the fact that they have disrespected the law is not a precedent I would hope that would be broadly followed. But we’ll have to look at the legitimacy or lack of legitimacy of what they do.”

Schiff didn’t say when the final Jan. 6 select committee’s report would be released to the public. The panel will end with the start of the next Congress in January 2023—like all other select committees created during the current session of Congress.

“We’re going to get to a consensus on the report; we’re very close to that now,” Schiff said on Nov. 27.

When Republicans take the majority next year, it’s not likely that they’ll opt to revive the Jan. 6 select committee. Few Republican House lawmakers expressed support for the panel other than Cheney and Kinzinger.

About a week ago, fellow committee member Rep. Zoe Lofgren (D-Calif.) told CBS News that the panel plans to release “all the evidence … within a month.”