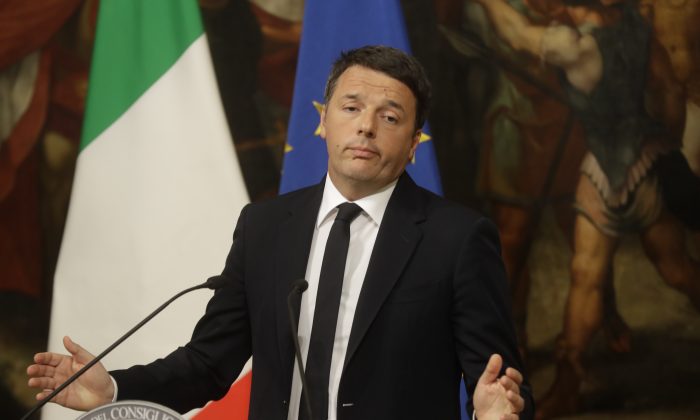 Italian Premier Matteo Renzi speaks during a press conference at the premier's office Chigi Palace in Rome, early on Dec. 5, 2016. Renzi acknowledged defeat in a constitutional referendum and announced he would resign on Monday. Italians voted Sunday in a referendum on constitutional reforms that Premier Matteo Renzi has staked his political future on. (AP Photo/Gregorio Borgia)
Europe

The blow to Renzi also delivered a rebuke to Italy’s establishment, which had staunchly backed the referendum. The political upset, which could spook investors, comes just as the government had made some inroads in cutting the staggering rate of youth employment and while Italy’s banks have urgent need for recapitalization.

The Movement, led by anti-euro comic Beppe Grillo, spearheaded the No camp on the constitutional reforms, a package aimed at updating Italy’s post-war Constitution that Renzi had depicted as vital to modernizing Italy and reviving its economy.

Characteristically confident—detractors say arrogant—Renzi, 41, and Italy’s youngest premier, had bet his political future—or at least his current premiership—on a Yes vote win, and campaigned hard for a victory in recent weeks to confound opinion polls indicating that it would likely go down to defeat.

With votes counted from nearly all the polling stations in Sunday’s referendum, the No’s were leading Yes votes by a 6-to-4 margin, Interior Ministry data indicated. The turnout of 67 percent was especially high for a referendum, and more in line for a vote for Parliament.

“I lost and the post that gets eliminated is mine,” Renzi said early Monday about an hour after the polls closed. “The government’s experience is over, and in the afternoon I’ll go to the Quirinal Hill to hand in my resignation” to President Sergio Mattarella.

Leaders of the populist 5-Star Movement, which is led by Grillo, joined the chorus among opposition forces for early elections. The 5-Stars are the chief rivals of Renzi’s Democrats and are anxious to achieve national power for the first time.

“Today the caste in power lost,” said a 5-Star leader, Luigi Di Maio. It was a sharp retort to Renzi’s characterizing the reforms as an opportunity to shrink the “caste” of elite, perk-enjoying politicians by reducing the numbers and powers of Senators.

“Arrogance lost, from which we’ll learn many things in forming our team for government and our platform,” Di Maio said. “Starting tomorrow we’ll be working on a government of the 5-Stars, we’ll involve the energies and the free persons who want to participate.”

The 5-Stars’ constituency is largely internet based, and bills itself as anti-establishment.

Italy’s Voter Referendum: The Nuts and Bolts Behind the Buzz

“The man alone at the command doesn’t exist anymore, but the citizens who govern the institutions” do, Di Maio told a news conference minutes after Renzi conceded.

Mattarella, as head of state, would have to decide whether to accept Renzi’s resignation.

Renzi is widely expected to be asked to stay on at least until a budget bill can be passed later this month and to shepherd the process of reforming electoral rules, which now as they stand, would grant the biggest vote-getting a generous bonus of seats in Parliament.

With the momentum on their side, the 5-Stars expressed minimal interest in any ambitious reform.

Renzi’s Democrats and the center-right opposition of former Premier Silvio Berlusconi want the law changed to avoid such a big bonus to a winner, in case the 5-Stars garner the most votes.

Elections are due in spring 2018, but with Renzi’s stepping down, they would likely be held sometime in 2017.

Another opposition leader, Matteo Salvini, of the anti-immigration Northern League, hailed the referendum as a “victory of the people against the strong powers of three-quarters of the world.” He urged elections straightaway.

Many had read the referendum as an outlet for growing anti-establishment, populist sentiment in Europe.

Why Italy’s Prime Minister Is Facing a Day of Reckoning

When Renzi late last year promised to resign if the referendum was defeated, it was months before Britain’s David Cameron had made his ill-fated bet that a referendum would cement the U.K.’s membership in the European Union. He was forced to resign when Britons instead voted to leave the EU.

In Italy, the referendum was required because the reforms were approved by less than two-thirds of Parliament. But Renzi raised the stakes, turning the referendum into a virtual plebiscite on himself, when he pledged to quit if Italians turned their back on reforms to streamline the Senate and give the central government more powers at the cost of the regions.

“We are ready to vote as soon as possible,” Salvini told reporters.

Renzi had been hoping to survive the rising populist forces that have gained traction across Europe.

In Italy, Renzi’s opponents counted on tapping into the populist sentiment rising in much of Europe as well as the U.S. presidential victory last month by billionaire political outsider Donald Trump.