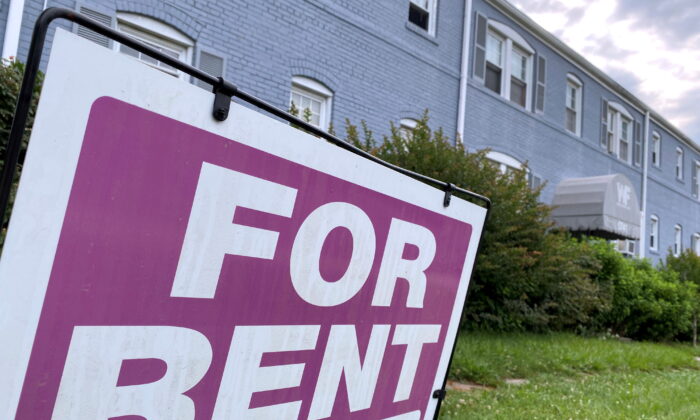 A "For Rent" sign is displayed in front of an apartment building in Arlington, Va., on June 20, 2021. (Will Dunham/Reuters)
Markets

Rent for single-family homes in the United States surged 10.2 percent in the 12 months through September, marking the fastest pace of annual rent inflation in 16 years, according to a new report from CoreLogic.

“Rent growth should continue to be robust in the near term, especially as the labor market continues to improve,” Boesel predicted.

In a sign of labor market tightness, a recent government report showed that the number of job openings on the last business day in September was 10.4 million. While that’s down from July’s record high of 11.1 million, it’s a historically elevated figure that reinforces the view that workers are harder to come by.

Meanwhile, the so-called quits rate, which reflects worker confidence in being able to find a better job, rose to a record high of 3.0 percent, according to Labor Department data, which painted a picture of the growing pricing power of workers.

And while a separate CoreLogic report indicated that 93 percent of consumers said they believe owning a home is a sound financial investment, fierce competition in the for-sale housing market is forcing more potential buyers to remain renters.

“Consumers continue to feel the push and pull between the purchase and rental markets,” CoreLogic said in a release. “As the single-family rental market faces similar supply challenges as the for-sale market, we can expect a continued increase in rents, especially across high-end rentals as renters seek more space.”

A Commerce Department report in late October said that the median new house price accelerated 18.7 percent in the year through September to $408,800, making homeownership less affordable for some first-time buyers.

The lowest-priced tier, 75 percent or less than the regional median, grew at the slowest pace at 8.3 percent, though still far higher than the 2.4 percent a year ago in September.

Miami saw the highest year-over-year single-family rent increase in September, rising at 25.7 percent. This was followed by Phoenix at 19.8 percent and Las Vegas at 15.9 percent.