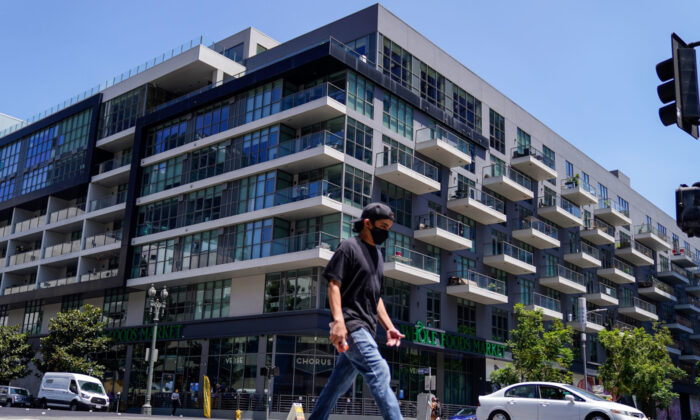 If you’re a renter you well could get hit with much higher rent—after already paying a lot more the past decade. The culprit is California rent control laws. That’s because rent control always backfires, constricting the rental market and in the end increasing prices for most people.

I’m a renter myself. So I’ll be looking harder, again, at heading out to Phoenix, where my relatives pay half what we do here.

The biggest culprit is Assembly Bill 1482 from 2019, inaccurately named the Tenant Protection Act. It allows rents to rise only 5 percent annually, plus the local rate of inflation. But there’s a cap of 10 percent.

According to the U.S. Bureau of Labor Statistics, in June for the Los Angeles-Long Beach-Anaheim metropolitan area, prices jumped 1.1 percent. If that keeps up, it will clock at 13.2 percent for a year.

Here’s their chart for the yearly LA-LB-Anaheim area, which number is somewhat less so far. But bad enough. Note the trend. And note the month the spike began: January 2021, when Biden took office.

And those numbers don’t take into account the CPI was rigged by President Clinton to make his data look better before the 1996 election. If the pre-Clinton formulas were used, it would be much higher. For example, the ShadowStats website, using the old way of calculation, figured a “corrected” CPI for the whole country of 17.1 percent in June, almost double the official 9.l percent number from the government.

Translated to Southern California, that would make our local CPI something like 20 percent. Yet AB 1482 allows landlords to increase rents by only 10 percent.

There’s another aspect described by the Los Angeles Times (although they didn’t provide the analysis I’m doing here.) They accurately reported about the maximum allowed 10 percent hike, “In previous years, the total increase has hovered between 5.7% and 9%. But the 10% limit applies only to complexes built before 2007 and those not subjected to rent-control restrictions, meaning that landlords of buildings that fall outside those parameters can raise their rents even higher. And because inflation is so high across the board right now, every region in the state meets the requirement for the cap to be set at a 10% increase.

“It also doesn’t apply to specific affordable housing units ‘restricted by deed, regulatory restriction contained in an agreement with a government agency or other recorded document’ for low-to-moderate income families and tenants.”

But here’s the problem they didn’t finger, even as they inaccurately called rent control “protections.” What really happens is those tenants enjoying rent control get a benefit, at least until the landlord gets sick of not being able to make enough money to fix the plumbing and converts the units into condos for sale.

But even those units without rent control are affected because they become more in demand. People also are less likely to move out of rent-controlled units because they will lose the great benefit of paying low rent. That reduces market “elasticity,” meaning it’s less able to meet market demands—another pressure against constructing new units.

Where there is no rent control, those units soar even higher in rents as landlords seek to make a profit somewhere, anywhere. Those not fortunate enough to live in rent-controlled units then suffer from the largesse given to those who do.

A big part of the problem is in 2019, when AB 1482 was passed, few expected the return to the 1970s-era inflation we have suffered under President Biden. Which brings up another problem. In addition to making everything cost more, inflation scrambles price calculations by families and businesses.

People have no idea how much they will pay for rent or almost anything next year. This makes it difficult to know if, for example, you should replace your house’s leaky roof, or wait till next year—or bring on new hires to expand your business.

The textbook example of the failure of rent control is New York City, which imposed it “temporarily” during World War II as an emergency measure as millions of GI’s flooded into the city—including my father en route to being shipped to Great Britain before the D-Day invasion. The control remains even though the war ended 77 years ago.

A 2005 study by the New York Sun found celebrity Mia Farrow “paid less than $2,500 a month for an 11-room apartment overlooking Central Park she inherited from her parents. The property was even featured in a movie by her former partner Woody Allen.”

And Cindy Lauper went to court “to get her $3,250 rent lowered to $508 for a suite in a building where some units rent for $10,000. The judge said she was being too ambitious, but the singer, whose hits include ‘Girls Just Want to Have Fun,’ still came away with permission to pay only $989.”

She might be having fun, but those who can’t find a place to stay in the Big Apple aren’t.

On the positive side, if you can call it that, the continued exodus of people from California will reduce pressure on rents. Even paradise can cost too much.