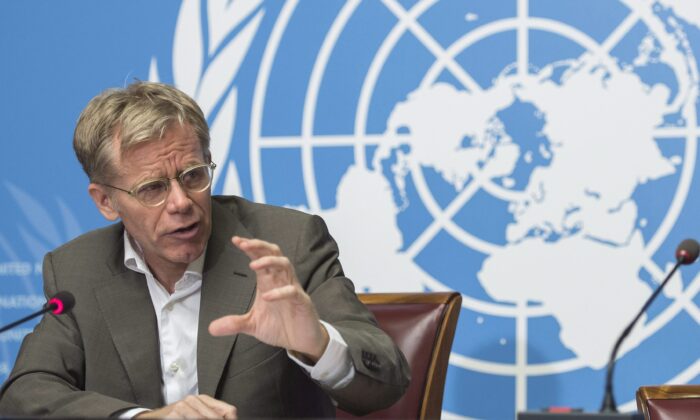 Canadian epidemiologist Bruce Aylward speaks during a press conference at the United Nations European headquarters in Geneva, Switzerland, on July 7, 2016. Aylward will lead an international team of experts in the study of China's novel coronavirus outbreak. (The Canadian Press/AP, Keystone)
Canada

OTTAWA—Renowned Canadian epidemiologist Bruce Aylward will be leading a team of World Health Organization experts in China to study the outbreak of the novel coronavirus.

Aylward arrived in China today to lay the groundwork for the larger international team tasked with learning more about the virus and China’s public health response to it.

Dr. Michael Ryan, executive director of WHO’s health emergencies program, says the team’s mission will be to learn what investigations into the virus have already been carried out in China and to understand what has been one of the largest public health responses in history.

But first, Ryan says Aylward and his team will be looking to the origin of the virus and the severity of the disease.

Aylward is a veteran of past infectious disease outbreaks, having directed WHO’s 2,000-person response to the West Africa Ebola outbreak.

He joined WHO in 1992, and worked in the Middle East, Western Pacific, Europe, North Africa and Central and Southeast Asia in the field of immunization and communicable disease control; he has been responsible for a major overhaul of the way WHO responds to health emergencies.

In China, Aylward and his team of about 10 experts will collaborate with Chinese scientists and public health officials to decide which parts of the country to visit, and which unanswered questions to tackle first.

Meanwhile, a second Canadian plane carrying evacuees from the quarantined region of Hubei, China, has landed at Canadian Forces Base Trenton in southern Ontario.

Myriam Larouche, one of the 213 Canadians who were flown in Friday from the Chinese epicentre of the novel coronavirus outbreak, says life under quarantine at the base feels like summer camp.