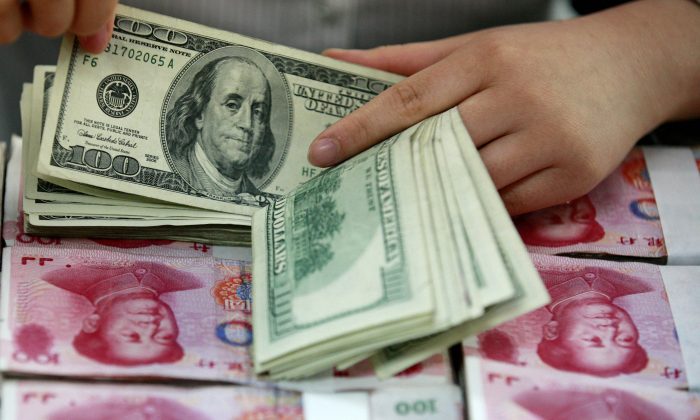 The duality conundrum of the Chinese currency is intriguing but can be explained using the plunging elevator theory. (Epoch Times)
Opinion

The duality of Chinese currency Renminbi (RMB) bewildered many inside and outside of China. This strange phenomenon refers to the situation where the Chinese currency seems to be severely undervalued in the eyes of China’s global trading partners, calculatingly manipulated to be so by the government; yet in the eyes of people inside of China, the currency with Mao’s head on it seems to be worth less and less very quickly over the years, also under the watchful eyes of the government. Is RMB over valued or undervalued, after all? Moreover, should the Chinese currency be, if allowed to fluctuate freely, appreciating or depreciating, in actuality?

Back in November of 2010, when I was writing a column article for New Epoch magazine entitled “The inside and outside views of RMB duality”, this phenomenon was already quite prevalent six years ago. The situation got more severe over the years, as the Chinese currency seems to be under pressure to be both depreciating and appreciating at the same time. Worse, citizens of China do not get to enjoy the benefit of a stronger currency, such as increased purchasing power internationally, yet the masses suffered enough from the inflation of RMB in China and escalation of prices in housing, healthcare, and education.

Why is RMB under pressure to go both ways, and known commonly as appreciating externally outside of China and depreciating internally inside China? The government insists that they want to maintain a pegged exchange rate and are against RMB appreciation in order to create jobs and maintain economic stability, and not because of inflation and the hot money, which is fleeing China. This could partially be true, but they ignored the most important, most crucial, and the manufactured factor in the process.

The fundamental reason that RMB seems to be poised to appreciate externally and depreciate internally is that the Communist regime has found an excellent way to plunder and loot from the Chinese nation and people, using forced currency exchange, restriction on exchange, hoarding of hard currencies, and maintaining a massive foreign exchange reserve (at 3 trillion US dollars at present) by injecting about 18 trillion Chinese dollars to the economy. No wonder President Trump is eager to declare China as a currency manipulator, as this outright and open looting by the last and largest Communist regime is not only hurting the people of China, but American exports and jobs as well. Thanks to America that opened the door for China when Nixon made his historical visit in 1972, the regime found a great way to plunder the wealth from the nation and accumulate liquid assets that offer them the ability to purchase luxuries and make large acquisitions overseas.

Foreign exchange control and the CCP’s insatiable urge to earn hard currencies is their best means to accumulate wealth and storing them outside of China, and printing huge amount of RMB is CCP’s easiest way to plunder inside of China, just as almost all dictators and authoritarian regimes have done in the past. The pressure for RMB to appreciate is from the huge trade surplus China enjoys, especially that with the United States, amounting to 300-400 billion dollars a year at present. The pressure for RMB to depreciate is over supply of RMB inside of China and the non-convertibility of the RMB. The regime printed in excess of 10-20 trillion Chinese dollars of the currency to stimulate the economy and create the real estate bubble. That is the true reason there presents pressures for RMB to go both ways, and the eventual duality of the currency. Boosting export with government subsidies, excessive printing of money, foreign exchange control, and currency manipulation are the ultimate reasons the duality of RMB exists today. In normal countries, the pressures from both sides could reach a balance with market adjustment, price changes, and fluctuations in exchange rates. However, in an abnormal country such as China, the government controls tightly all the factors from exchange rates to M2 and even CPI (they lied about CPI and inflation in addition to GDP figures), so the pressure from both sides could not reach a balance point, and the consequence is what we see today: a paradox and duality in the currency!

Former UC Irvine economic professor Peter Navarro was nominated by President Trump to lead the newly formed White House National Trade Council, which is a think tank and policy-setting arm of the administration. The duality of Chinese currency is something the council will have to look into to come up with a viable policy to deal with China.

To put in perspective, the conundrum and mystery of Chinese currency RMB is like an elevator car that is out of control and plunging in the shaft. One can imagine the elevator as the Chinese economy; the elevator car filled with RMB. Chinese government’s policy of printing excessive amount of money caused the elevator to overload, and the elevator is so heavy that the cable on top of it breaks, so the elevator car becomes out of control and begins to plummet. (Of course, a real elevator with automatic braking device will not plummet, this is just a metaphor) Descending of the elevator car represents the pressure for the RMB to depreciate. At this time, people from the upper floors of the building found the elevator cable broken, so they reached out their hands to grab the cable, in an attempt to prevent the elevator car from going down further. In addition, the good Samaritans tried hard to pull the car up. This uplifting force is China’s trade surplus with the world, especially with the United States, and this is the pressure to appreciate the Renminbi. Therefore, the elevator car is in a desperate free fall, but also in an effort to rise up, which mirrors RMB’s duality, or appreciating externally and depreciating internally.

So what could be the true, market exchange rate of RMB? Only God knows, before China becomes a true market economy. Yet in the opinion of this author, the most comparable currency with the Renminbi is NTD (new Taiwanese dollar). Taiwan’s level of productivity and industrial efficiency is clear and known to the world, and the exchange rate between new Taiwanese dollar and the US dollar is market driven. Based on Taiwan’s wages, productivity, and consumer price level, and the exchange rate of the Taiwanese dollar, the RMB to US dollar ratio of 1:10 to 1:15 seems reasonable, if the Chinese government continues to let the RMB flood the market. If the Chinese authority would adopt the policy of returning to the people the land and true ownership of real properties, trillions of over-printed RMB could be recollected and pulled out of market, then a RMB to USD exchange rate of 5:1, a rate that was prevalent in the 1980’s, would become probable and acceptable.

With Trump administration in full gear, and an America first policy in full display, China’s trade surplus will soon diminish, and US trade deficit will decrease, how will the RMB go then? One only need to look at the elevator car again, to see which force, descending or ascending, is dominating…