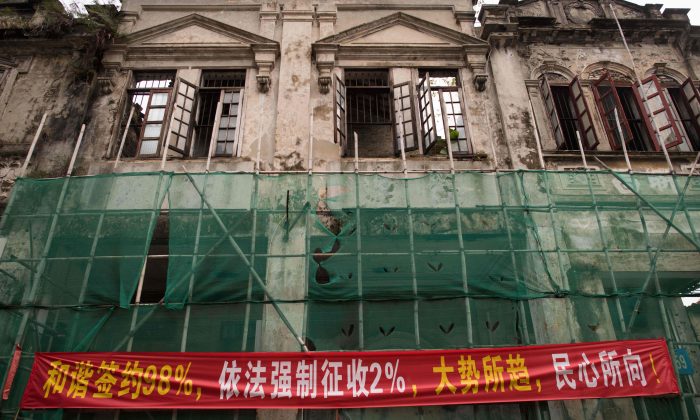 In this picture taken on May 28, 2018, a banner that reads "98 percent of people have signed contracts in a pleasing way, 2 percent of peoples houses have been forced-collected according to law, its the trend of the time and coinciding with the popular will" is seen on a building in Chikan village in Kaiping. (NICOLAS ASFOURI/AFP/Getty Images)
China

The wealth of China’s middle and lower-middle class is locked up in the country’s increasingly risky real estate market, according a study published Nov. 24 by Renmin University of China.

At a press conference held at the Analysis and Forecast of Macroeconomic Performance of China 2018–2019 conference, held in Beijing, the report by National Academy of Development and Strategy of Renmin University indicated that the debt rate of destocking in real estate for Chinese consumers rose sharply and that the consumption base has been severely weakened. At present, the wealth of residents is basically tied to property.

According to the analysis, the phenomenon of having assets locked up in real estate was mostly limited to the upper-middle class prior to 2015. But a new round of property market destocking—in particular, monetization and encouraging migrant workers to buy houses—has driven members of the class with less liquid savings to invest as much as possible in real estate.

Today, the core drivers of consumption are not members of the high-income class, but Chinese of middle- and lower-middle class income. However, money available for consumption by this demographic has diminished greatly, which is important in accounting for the shift in Chinese consumer behavior.

Another significant change was that residents’ net savings have continued to decline. According to financial data released by the People’s Bank of China, as of September, the net savings of residents (deposits minus loans) amounted to about 24.7 trillion yuan ($3.56 trillion), falling 6.7 percent from 2017. From 2016 going into 2017, it dropped 6.3 percent.

Data on GDP across China’s 31 provinces and real-estate development investment data in the first three quarters of 2018 also was released on Nov. 24. The data shows that provincial economies depend on real estate.

In the first three quarters of 2018, the top five provinces in real estate development investment accounted for about 42 percent of the country’s total investment. According to Chinese provincial data, real estate development investment in the southern province of Guangdong ranked first with 1.03 trillion yuan ($148.33 billion), followed by Jiangsu, Zhejiang, Shandong, and Henan provinces.

Jin Li, deputy dean of the Guanghua School of Management at Peking University, told the financial channel of NetEase on Nov. 22 that Chinese people rely on real estate and real-estate investment as a means of storing their wealth. That’s caused many problems in the real estate sector. The price of housing rises too fast, and secondly, with a large amount of wealth is concentrated in the real estate sector, sales and output in other sectors dwindle.

Li said that by 2012, there was no shortage of housing in China, with an average of approximately 40 square meters (430.6 square feet) of living space available per person. In third- and fourth-tier cities, including many rural areas, a large number of houses are vacant.

If people continue to buy houses as a means of storing wealth, within “30 years, we will have many houses waiting to be used, in exchange for food or other services. But the society will not produce that much food or service. There will be only houses,” Li said. With widespread selling, real purchasing power will fall dramatically.

Yi Xianrong, a professor at the School of Economics in Qingdao University, wrote in a Nov. 23 article that the market value of real estate in China was $65 trillion, but the market value of real estate in the United States, the European Union, and Japan combined was only $60 trillion. That, he said, doesn’t indicate a rapid increase in wealth, but rather points to high risks in China’s economy, financial system, and the banking industry.