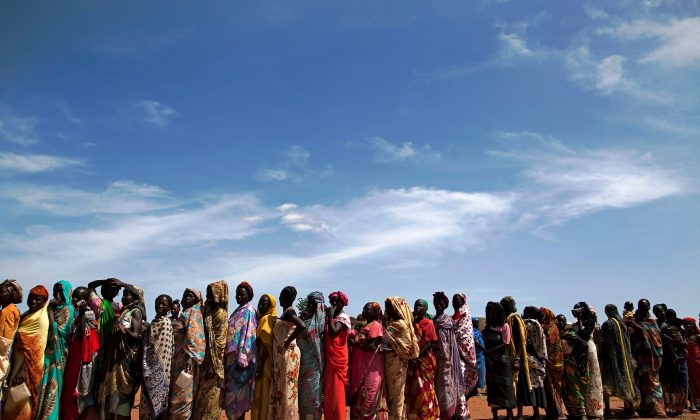 Internally displaced people (IDPs) recently arrived to Wau, South Sudan, due to armed clashes in surrounding villages, wait to be registered by the International Organization for Migration (IOM) and the World Food Program (WFP) on May 11, 2016. (Albert Gonzalez Farran/AFP/Getty Images)
Africa

JUBA, South Sudan—Renewed gunfights broke out across South Sudan’s capital Sunday between forces loyal to the president and those of the vice president, officials said Sunday, causing widespread casualties and raising fears that the country is returning to civil war.

The fighting hit a U.N. camp for displaced people sheltering from the violence, according to witnesses.

“The condition is really very bad. We have a lot of casualties this side, I think around 50 to 60 besides those of yesterday,” said Budbud Chol who oversees security at a clinic in the base. “We have civilian casualties. We have rocket-propelled grenades that have landed in the camp which has wounded eight people.” Among the wounded are five children and two women while the rest were men, he said.

At least one person has died in the camp, he said, but he did not know about casualties outside where the fighting is heavy.

Government forces attacked a rebel base in the Jebel area of the capital Sunday morning, said William Gatjiath Deng, a spokesman for the rebel forces.

“Three helicopter gunships have just come now and bombed our side,” he said.

South Sudan’s army confirmed the Sunday clashes but it is not clear how the fighting started, said army spokesman Lul Ruai Koang, who is in the SPLA general headquarters at Bilpham.

The fighting appears to be mainly in two areas: Jebel, where there is an opposition base and a U.N. base which houses thousands of internally displaced people, and in Gudele, where the rebels have another opposition base, including Machar’s compound. There have been huge explosions in Gudele and people are fleeing by foot, said a resident, who spoke on condition of anonymity for fear for her safety.

“I’ve gotten calls that I should leave but there was so much gunfire nearby I decided to stay in,” she said.

“The situation in Juba has significantly deteriorated,” said a statement by the United States embassy. “There is serious fighting between government and opposition forces, including near the airport, U.N. mission locations, Jebel and elsewhere throughout Juba. U.S. citizens in Juba should remain vigilant … shelter in a safe location, preferably away from doors and windows, and avoid non-essential movements.”

The U.N. Mission in South Sudan is on a high security alert with no movement of U.N. personnel whatsoever, said Shantal Persaud, spokeswoman for the U.N. mission.

Sunday’s fighting is a resumption of the conflict on Friday in which more than 100 people died. A precarious calm was restored on Saturday—the day South Sudan was to celebrate its fifth independence day—that was shattered by heavy gunfire Sunday.

The two leaders issued a joint call for calm after Friday’s fighting which began outside the presidential compound where Kiir and Machar were meeting and soon spread through the city.

A similar skirmish in December 2013 sparked of the civil war that killed tens of thousands of people.