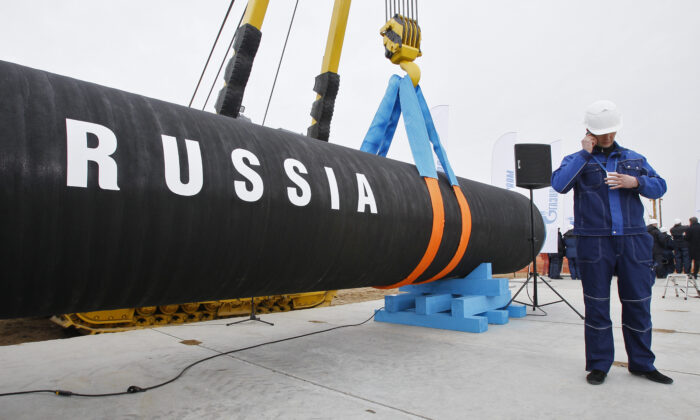 Renewables Place Europe’s Electricity at the Mercy of Russia

Countries in Europe that have shifted away from coal in favour of renewables are now vulnerable to electricity price shocks as Russia—the region’s primary natural gas supplier—begins its invasion of Ukraine.

Except for Poland, all countries in the European Union (EU) have pledged to reach net-zero emissions by 2050.

To achieve this, the EU has begun phasing out coal power and accelerated the uptake of wind, which has soared nearly twenty-fold from 20 TWh (terawatt-hours) to 400 TWh over the last two decades.

But intermittent forms of power generation, such as wind and solar, depend entirely on weather and daylight, with power not guaranteed to meet the demand at all times.

To combat this via the renewables route, energy storage is required, such as through batteries or big pumped hydro systems. However—unlike wind—the uptake of energy storage has not kept up the same pace.

This means that for periods when wind and solar output drops, Europe relies heavily on liquefied natural gas (LNG) to prop up capacity and, as a consequence, LNG’s make-up of the electricity mix has doubled over the last 25 years.

Nearly 40 percent of this natural gas comes from Russia, carried through four major corridors—Nordstream through the Baltic Sea, TurkStream through Turkey, Yamal through Poland, and several through Ukraine.

A spectre of uncertainty hovers over Europe, with some believing Russia would not dare to switch off the gas pipelines critical to the region’s renewables-rich grid.

“I am convinced the Russians don’t want to use gas as a weapon in the dispute,” Pouyanne said at the International Energy Week conference.

Pouyanne added that LNG operations had not been affected by the conflict so far.

Russia’s majority-state owned gas company Gazprom backed the sentiment, outlining that gas exports have continued without disturbance amid the conflict and are in line with Europe’s demand.

But concerns are brewing that Russia retains the power to send shockwaves throughout Europe’s gas and electricity markets at the flick of a switch.

In response to the invasion of Ukraine, Europe, the United States, and other countries around the world have slapped sanctions against Russia, which included halting the $11 billion Nord Stream 2 pipeline running parallel to its predecessor in the Baltic Sea.

Former Russian President and Deputy Chairman of the Security Council of Russia, Dmitri Medvedev, told Europeans they could expect prices to double as a result of the suspension of Nord Stream 2.

“Welcome to the new world where Europeans will soon have to pay 2,000 euros per thousand cubic metres!” Medvedev tweeted.

German Chancellor Olaf Scholz has issued an order to halt the process of certifying the Nord Stream 2 gas pipeline. Well. Welcome to the brave new world where Europeans are very soon going to pay €2.000 for 1.000 cubic meters of natural gas!

Europe and the United Kingdom had also just come off the back of an energy crisis in 2021, with gas and electricity prices skyrocketing after cold weather and a lack of wind forced the bloc to import more LNG for power and heating.

During this time, Russia faced accusations of instigating price shocks by deliberately failing to meet heightened gas demand for gas, a claim that President Vladimir Putin has denied.

Saad al-Kaabi, energy minister for Qatar—one of the largest sources of Europe’s overseas gas imports—warned that in the event of Russia sealing the flow of gas, no country would be capable of helping Europe fast enough to make up for the shortfall.

“Russia (provides) I think 30 to 40 percent of the supply to Europe. There is no single country that can replace that kind of volume, there isn’t the capacity to do that from LNG,” Kaabi told reporters at a gas conference in Doha.

“Most of the LNG are tied to long-term contracts and destinations that are very clear. So, to replace that sum of volume that quickly is almost impossible,” he said.