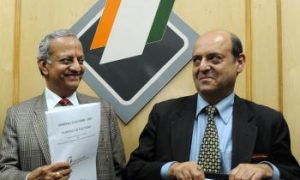 India to Go to Polls from April 16
0
Business

By Caroline Dobson
Print
Renault SA, France's second-largest automaker, is having a rocky start to 2011, after detecting international industrial espionage in its operations.

A company statement said this case was “misconduct that infringes Renault's ethics, [and] consciously and deliberately [endangered] the company's assets.”

After a five-month investigation, three senior managers have been suspended due to their alleged involvement in the leaking of strategic information regarding electric cars and Renault’s future plans to an international spy network. Union leaders, who remained anonymous, were interviewed by AFP. A total of three individuals, accompanied by union representatives, had meetings with Renault bosses.

Based on recent reports from media and commentators, the specific information being sought after was related to vested interests in its electric program, which was traced to possible Chinese involvement.

"China has repeatedly been caught spying in this sector—notably at Valeo—and we know the Chinese are working very hard to build their automotive industry quickly, and inexpensively," notes Eric Denécé, director of the French Center on Intelligence Research reported Time. "European and Japanese rivals have enough information in this area to make such risky spying unnecessary. Americans and the British have such good technology that they don't bother trying to steal it."

According to Bloomberg, lawmaker Bernard Carayon, an expert on industrial espionage, said that "proven, diverse, and reliable" sources pointed to an effort to obtain secrets from three Renault executives suspended by the automaker this week.

Japan’s Nissan Motor Co., an alliance partner controlled by Renault, has invested at least $4 billion into the electric car market and recently released the Nissan Leaf plug-in electric vehicle. There are plans for four electric vehicles to be launched over two years. Renault predicts that by 2020 electric cars will make up 10 percent of the automobile industry.

French President Nicolas Sarkozy has asked for the country’s intelligence agency to examine China’s alleged involvement in the leaking of industrial secrets. French Industry Minister Eric Besson, alerted said that the country was facing an “economic war.” Renault is 15 percent owned by the government.

In a RTL radio interview on Jan. 6, Besson felt that this instance is a “broad threat to French industry, [and] highlights the risks that our companies face from industrial spying."

The controversial incident is prompting reactions from French politicians and media.

“We cannot accept that an innovation financed by the French taxpayer ends up in the hands of the Chinese,” an Industry Ministry source said.