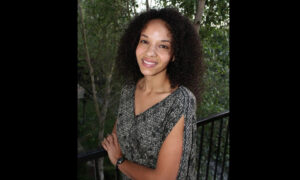 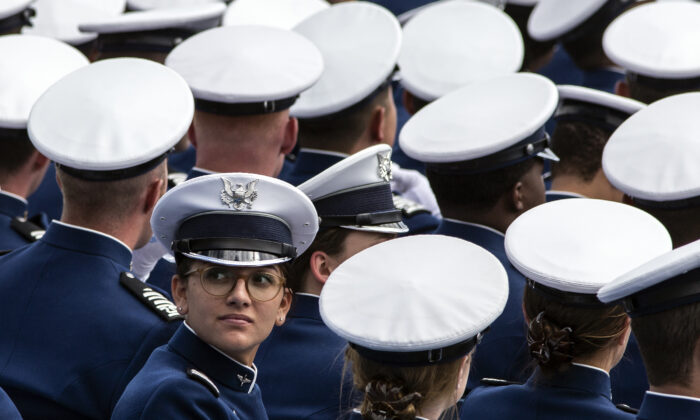 A graduating cadet looks back to the audience during the 2019 graduation ceremony at the United States Air Force Academy in Colorado Springs, Colo., on May 30, 2019. (Chet Strange/AFP via Getty Images)
US News

A teacher at the U.S. Air Force Academy who boasted in a recent op-ed of teaching critical race theory in her classroom should be removed, members of Congress said this week.

In a piece published by the Washington Post, Lynne Chandler Garcia, an associate professor of political science at the academy, claimed that the Constitution once “allowed slavery” and that racism has been “ingrained” in the U.S. military system “from the beginning.”

“As a professor of political science at the U.S. Air Force Academy, I teach critical race theories to our nation’s future military leaders because it is vital that cadets understand the history of the racism that has shaped both foreign and domestic policy,” she wrote.

Garcia referenced how Joint Chiefs Chairman Mark Milley last month told members of Congress who questioned him and others about how critical race theory was reportedly being taught that the academy that he has read Karl Marx, widely seen as the founder of communism, and Mao Zedong, whose policies led to tens of millions of deaths in communist China.

“That doesn’t make me a communist,” Milley said. “So what is wrong with understanding … the country which we are here to defend?”

But in a letter to Air Force Secretary John Roth made public on Thursday, Rep. Mark Greene (R-Tenn.) said “Garcia’s full-throttled attack on our country and her support for Critical Race Theory render her unqualified to teach in one of our prestigious military academies.”

Critical race theory has proven increasingly divisive, with Democrats broadly supporting it and Republicans denouncing it. The theory, which is rooted in Marxist ideas, focuses on race and lumps people together based on their race, and proponents often argue that minorities in America suffer from “systemic racism,” or racism embedded across various parts of society.

“I read professor Garcia’s op-ed. It’s clear she knows very little about our Constitution, which is so typical of colleges these days. She has no business teaching the Constitution or political science to cadets at the Air Force,” he said during an appearance on Fox News this week.

Lawmakers noted that Defense Secretary Lloyd Austin has claimed in recent congressional hearings that the military does not teach or condone critical race theory, a claim undermined by Garcia.