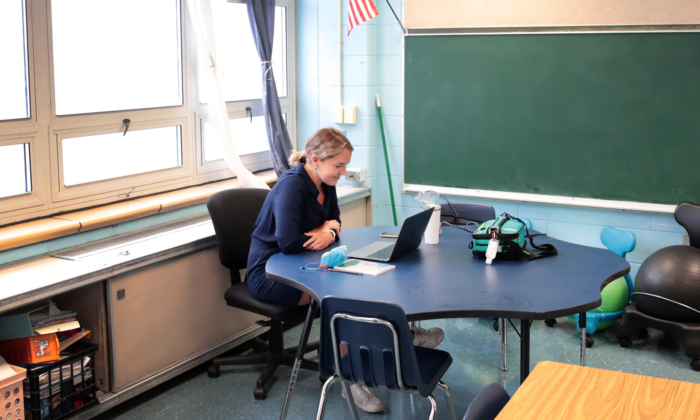 A teacher at King Elementary School sits in an empty classroom teaching her students remotely during the first day of classes in Chicago on Sept. 8, 2020. (Scott Olson/Getty Images)
Education & Family

The online learning environment hastily imposed on students during the ongoing pandemic has accelerated the growth of cancel culture at U.S. universities, according to a new report by the American Council of Trustees and Alumni (ACTA).

Relying on empirical data taken from student surveys along with insights from faculty and higher education leaders across the nation, the Sept. 8 report “Building a Culture of Free Expression in the Online Classroom” asserts that the sudden, widespread adoption of virtual education in this country worsened the free-speech crisis on college campuses, further limited diversity of viewpoints, and encouraged more self-censorship among students.

“The lifeblood of the liberal arts is debate, dialectic, inquiry, and challenge,” ACTA President Michael Poliakoff said in a statement. ACTA describes itself as “an independent, nonprofit organization dedicated to promoting academic excellence, academic freedom, and accountability at America’s colleges and universities.”

“In the midst of the COVID-19 pandemic that has threatened the strength and even the survival of so many institutions, online education moved to the fore. We have seen that it can bless us with access to a vibrant exchange of ideas, but it also has the potential to eliminate the opportunity for growth of character and intellect,” Poliakoff said.

The report comes after an ACTA/College Pulse national survey of more than 2,100 college students in 2019 found that 61 percent stop themselves from expressing opinions “on sensitive political topics in class because of concerns [a] professor might disagree with them” at least “occasionally.”

The fact that it’s so easy to record remote classroom activities makes sharing materials easy, including on social media, and gives students a resource for study, the report states.

This can help students and others, but at the same time creates problems, such as providing “an opportunity for partisans across the political spectrum to exploit the digital records in order to further an agenda that has nothing to do with learning.”

“Audio and video recordings speak directly to our passions and, consequently, can be more effective at rousing anger; and it is easier to misspeak or convey the wrong impression in conversation than by written communication for the simple reason that it happens so much faster,” according to the report.

Higher education hasn’t adapted well to the era of social media, “in which activists can unleash a torrent of negative attention on a university, faculty member, or student within minutes,” and schools are “increasingly forced to engage with vocal activists,” the report states.

Activists willing to tarnish a university’s reputation have an automatic advantage because academics and the schools they work in “are so sensitive to prestige and reputation.”

“Today, universities live in mortal fear of a negative Tweet gone viral. Presidents, deans, and provosts have, to this point, learned a dangerous lesson: that the easiest way to quiet the mob is to give into what it wants—usually by firing someone and denouncing his or her viewpoint—even if that means betraying core academic values,” the report states.

Faculty members can make the environment better by refraining from offering personal, partisan opinions, which often have the effect of making students feel less secure about sharing differing viewpoints, and by avoiding “discussing social and political issues in courses that are not directly related to current events,” the report states.