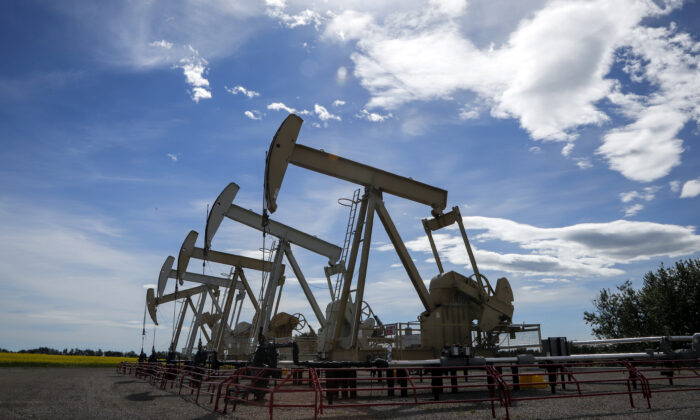 Pumpjacks draw oil out of the ground near Olds, Alberta., on July 16, 2020. (The Canadian Press/Jeff McIntosh)
Viewpoints

Reminder to Alberta: Energy Booms Can Be Fleeting

Now is an opportune time for Alberta to pursue economic diversification

There is a popular bumper sticker often seen in Alberta. It says: “Oh please God let there be another oil boom. I promise not to piss it all away this time.”

Alberta Premier Jason Kenney was outright jubilant when announcing the most recent provincial budget update. With finances sinking in Alberta over the last few years along with the premier’s own popularity, Kenney’s relief is understandable as he had an opportunity to finally announce some good news.

When the Alberta government tabled its budget last February, an $18.2 billion deficit was projected for the 2021 fiscal year. In last week’s quarterly budget update, the deficit projection was slashed to $5.8 billion. That makes it the lowest budget deficit Alberta has seen since 2014. This is great news for the Alberta government and Albertans at large. The governments of Saskatchewan and B.C. will both enjoy some budgetary relief as well as royalties from petrochemical production flow-in.

Shopping malls in Alberta are packed and Albertans are feeling flush. Job opportunities are plentiful and wage offers are high as energy companies scramble to bring their oil and gas fields back into production. It is easy when an energy boom hits to forget these booms can be fleeting.

As much as the Alberta government would like to take credit for the good numbers, nearly all of the deficit reduction can be attributed to the rise in oil and gas prices. Over $8 billion of the government windfall is directly due to natural resource revenue. The government enjoyed billions more as the heated economy drew tax revenue on everything from corporate taxes to hotel taxes not to mention personal income taxes from energy sector workers. We can’t pretend the rosy government financial picture was due to brilliant financial wizardry and spending restraint. The Alberta government got lucky.

It is now, though, at a place where the government can demonstrate wise fiscal acumen. The finance department and government ministries have to assume this oil and gas boom is temporary. There will be other booms in the future but there will be a bust in between. As tempting as it may be for the government to open the spending floodgates further, the treasury must remain frugal. Natural resource revenues have given the government some breathing room on their planning for economic recovery, but it will pass.

Right now is when Alberta should be pursuing economic diversification. Oil and gas will be a large component of the province’s revenue for decades to come, but the government needs to ween itself from dependence upon it. If spending restraint is maintained, corporate taxes can be kept low. Coupled with plans to cut red tape, Alberta could draw new enterprises and investments into the province, which could help stabilize the province during the low phases of the energy price roller coaster. Calgary has millions of square feet of vacant office space to be filled and energy companies won’t be doing it. This will take some self-control on the part of the government, though and they have not had a good historical record on that front.

It can’t be forgotten that while oil- and gas-producing provinces are enjoying an economic boost, the high oil and gas prices are making times even tougher in the rest of the country. Albertans shouldn’t be popping the champagne corks too loudly and enjoying conspicuous consumption right now. The last time we had national economic disparity like this due to high energy prices, then prime minister Pierre Trudeau imposed the National Energy Program on Alberta and shut down the boom quickly. Provincial humility is in order lest Prime Minister Justin Trudeau gets the notion to repeat his father’s actions.

World oil prices have already begun to sag a little due to the COVID-19 Omicron variant. Economic instability is sure to continue for some years yet as the pandemic has its ebbs and flows.

Everybody desperately needs some good news these days and Albertans deserve to enjoy it. Let’s hope the celebrations are also tempered with wisdom and foresight. As the old saying goes, what goes up must come down.

The message in that old bumper sticker is much more important during the booms than it is during the busts.