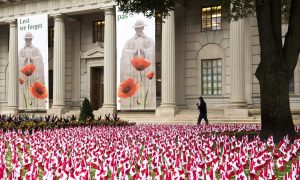 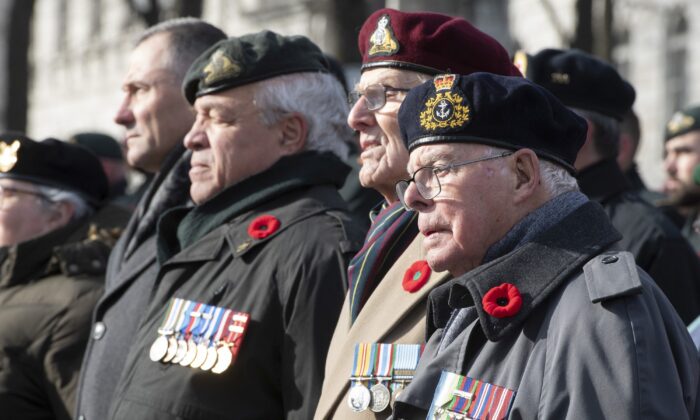 It wasn’t that long ago when men who fought in the first and second world wars were part and parcel of Remembrance Day ceremonies every Nov. 11. They marched, as straight and proud as they could, they sang, and they gathered at the local Legion to talk and laugh, eat and share with the rest of us, kids included.

In those days, world war veterans weren’t shut up in seniors’ homes, they were part of the fabric of everyday life: teachers, grocers, farmers, electricians, plumbers, shoe salesmen. My best friend as a boy in Toronto was Mark Davis, whose father, Tim Davis, fought the war as part of a tank crew, which made Mark proud. Unfortunately, neither of us thought to talk to his dad about his experiences and what they meant to him. Being kids, we just didn’t see it. And when we did encounter Mr. Davis, who worked as an electrician, he was usually busy watching Whipper Billy Watson wrestle on TV.

My experiences talking to strangers who had fought in the wars taught me that most of them preferred to leave their memories in the past. Little was willingly shared; mostly they talked among themselves, and mostly they recalled the good times—the jokes they played, the friends they met, the dances they attended, or the weapons they valued. That’s what I recall about their conversations in the Legions.

Remembrance Day meant a great deal to those old war vets. Nov. 11 helped to compensate for some of the indifferent treatment many received upon returning home from the battlefield. People on the home front didn’t always know how to relate to these men, often injured physically or emotionally or both, and misunderstandings did occur.

My late uncle J.M. “Mack” Bird, for instance, fought his way up the boot of Italy and then served in Holland. This amounted to about two years of fighting, staunching wounds, watching friends and enemies die, living in dirty clothes, and living among foreigners who also didn’t always understand why the Canadians were there. When one Dutchman asked my uncle why he was fighting in their country against an enemy that didn’t threaten Canada, he said, as he told me for my book, “My Dear Boy: A Family’s War-Time Letters and Memoirs”: “Because you aren’t free. Canadians are. We’re here to help you regain your freedom. None of us is conscripted. We’ve all volunteered.” (Only near the war’s end were a few conscripts sent overseas.)

When Mack got home and returned to his old job in Winnipeg in an accounting office, his boss actually said: “So many men died. Why did you survive?”

“I sometimes ask myself the same question,” he answered.

Make no mistake, such questions were asked, and they hurt.

My father, Clayton Bird, flew 34 operations in a Halifax bomber. When he returned home near the end of 1944, nobody greeted him or his peers, no band played, and there was no word of thanks. Harmed by the war, he couldn’t even study, and so he sold shoes until he re-enlisted.

The old vets valued Remembrance Day when the focus was on honouring their friends who didn’t come home, valuing those who made the supreme sacrifice in the fight against tyranny, which fascism was.

I asked Mack whether the army (he was with the Princess Patricia’s Canadian Light Infantry) taught the men in training about why they were in the war.

“No,” he said, “it wasn’t necessary. We all knew what was happening. Hitler had overrun Europe. I had some university training, more than most of the boys, but they knew why they had volunteered.”

He was there to kill Germans, he said, and as raw as that may sound today, at the time it was simple fact.

They also took prisoners, but there was great risk involved, and many men died doing so.

“What would happen is, you’d have a group of German soldiers surrender and throw down their arms,” Mack explained. “And then somebody, the sergeant or lieutenant would say, ‘Bill and Joe, you take that group over there.’ They’d go over. Bill would stand there with his rifle on guard. Joe would sling his rifle, and he would pat everybody down. While they were busy doing that, another German soldier would appear from over here somewhere and he’d see these two backs turned towards him, so he’d just bang! bang! [killing the two Canadians]. That would draw attention to him. He would drop his rifle, and we would have to take him prisoner.”

“I took 54 prisoners,” he said. “But if they had a gun in their hand and were swinging towards me, bam, they were gone.”

Mack said he kept count of the Nazi soldiers he killed “because you wanted to know how many you took out before they took you down. I believed I wasn’t in it for the long run. With the way things were going, there was no way you could survive. Remember, eight lieutenants before me had bought it. Why would I be any different?”

Remembrance Day continues to draw strong numbers of Canadians to the ceremonies and parades. But we sure do miss the men from the world wars. Thankfully, many of their stories and warnings are recorded in books. Barry Broadfoot’s “Six War Years 1939-1945” is one of the best.