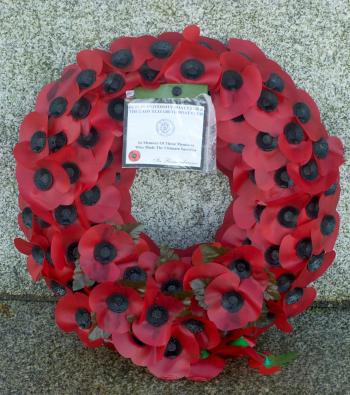 Remembering Those Who Made the Ultimate Sacrifice

Bridget Harris
biggersmaller
Print
It is usually during the month of November that we look into events from the past. During the long winter nights our thoughts drift back to those who passed away during the year that is now coming to a close. At this time also our thinking will dwell on the loss of life especially if that loss was the outcome of wars or events which possibly might have been avoided. The loss of life which resulted from last century’s two world wars brought to Europe and to us all here in Ireland is incalculable. Major changes took place across the face of the European map, changes left their mark not only on individuals but on whole families of those soldiers who died, suffered injuries or were stripped of their nationality and citizenship. There is also a place in our memories for the suffering and hardship which was the lot of those who managed to survive to the end.

Events which commemorate these sad happenings are carried out in most countries. Ireland is no exception. In recent times our towns, cities and counties have developed a place or monument where the general public or individuals can pay a visit in their own time. Most monuments have the names of the local people who lost their lives in these wars engraved there. It is an honourable and respectful thing to do. We are linking up with the past and those who have gone before us and with their families. Not only is it those who lost their lives in these wars whom we remember, we also relate with the people who were injured or disabled, their families also feel the pain and anguish.

England usually has a special date in November dedicated to honour the memory of these victims of war. Over the years they relive the falling of these young people with the falling of poppies (one for each person who was fatally injured in these wars). Ireland has unveiled a new symbol commemorating the contribution of Irish soldiers in the First World War. The symbol is a poppy with a shamrock emerging from its centre. It was launched at a special cross-border service of remembrance at the Island of Ireland Peace Park in Belgium.

The former Donegal TD Paddy Harte unveiled the new symbol at the scene, and expressed his hope that the new poppy/shamrock would be universally accepted and recognised as a symbol of remembrance for the Irish war dead. It is a touching design which no doubt will be honoured where ever it is displayed.

Many people will still remember some of those who returned home with their own story of the suffering and possibly friendship of their peers at that time. I recall when I was on my way home from school in the early 1930s at the age of seven a neighbour who had returned from the 1914-1918 War was sitting on the wall and telling me of life in the trenches. One day he mentioned fighting in a beet field. He described the cold and muddiness of the beet field. I felt very sad on hearing this and asked him if it would have been better to have the war in a battle field. There are many tales of related happenings which have gone on record. One such book ‘THE MISFIT SOLDIER, Edward Casey’ war story, 1914—1918 is most interesting and descriptive of events.