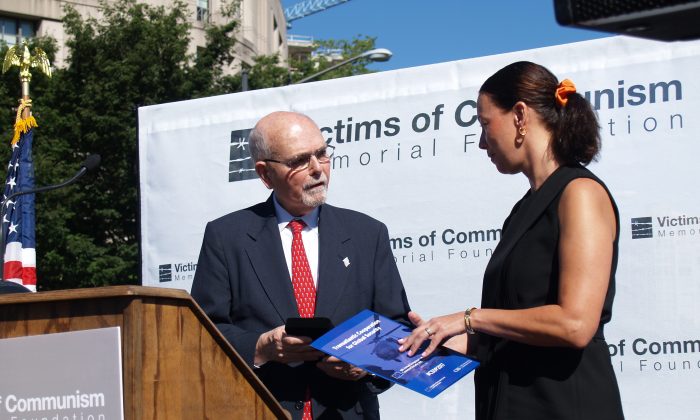 Remembering the Victims of Communism—for Them, and for Us

WASHINGTON—The power of memory—to honor, to console, to teach, and to warn—was evoked on the morning of June 9 at the award and wreath-laying ceremonies at the Victims of Communism Memorial.

The event began with the passionate violin playing of Wuilly Moisés Arteaga, a 23-year-old from the socialist state of Venezuela. Arteaga had been flown in from Caracas and promptly outfitted with a new violin. The police in Caracas, where Arteaga has regularly played in protests against the repressive Maduro regime, had smashed his previous instrument.

Perhaps the raw energy of Arteaga’s playing drew in part on grief for the recent death of his friend and fellow violinist Armando Cañizales, who was killed in the Caracas protests.

Arteaga played on a stage facing the memorial statue, a bronze replica of the Goddess of Democracy figure assembled from papier-mâché by the students on Tiananmen Square in 1989. The statue dominates a small plaza on a busy Washington street corner that is an easy walk from the Capitol.

This was a day for remembering the victims of communism, which is easier to do for one individual at a time, than for a group whose size strains our understanding.

The keynote speaker, Vytautas Landsbergis, said the enormity of the crimes of communism is “astonishing,” which means difficult to comprehend. Landsbergis noted the scale of the crimes can invite the remark, attributed to Josef Stalin, that while one death is a tragedy, a million deaths is a statistic.

On its website, The Victims of Communism Memorial Foundation refers to there being “more than 100 million” deaths and says its memorial is the only one in the world dedicated to every single victim of communism.

José Gutiérrez-Solana attended the first of the foundation’s memorial ceremonies 10 years ago and has attended every year since. He spent 10 years in Fidel Castro’s jails.

Gutiérrez-Solana was a law student who had joined with Castro to oppose the dictator Fulgencio Batista. Then Castro said there would be “no law and no constitution.” “That is not what we were fighting for,” Gutiérrez-Solana said, and so he began using his words to oppose the soon-to-be communist tyrant.

After Castro seized power, Gutiérrez-Solana was rounded up. He says he comes to this event each year “to pay tribute to our friends and brothers who lost their lives for freedom in Cuba.”

Gutiérrez-Solana escaped Cuba decades ago. Chi Lihua and her daughter, Xu Xinyang, escaped China only four months ago, in February.

Chi and Xu practice the spiritual discipline Falun Gong, which the Chinese Communist Party set out to eradicate in 1999. Chi’s husband died in 2009 after being tortured during an 8-year prison sentence for practicing Falun Gong. Chi said she has also lost her brother, father, and mother due to the persecution in China.

After her father’s death, Xu was forced to quit school, and several of her classmates, who also practiced Falun Gong, were arrested. Chi and Xu came to the foundation’s ceremony to ask for help for Falun Gong practitioners and in particular for Xu’s classmates. They don’t speak English, but brought with them a laminated poster in Chinese that tells about the persecution of Falun Gong. When asked to pose for a photo, they unfolded the poster and held it between them.

The foundation runs several activities meant to further its vision of “a world free from the false hope of communism.” Prominent among these is the awarding of the Truman-Reagan Medal of Freedom, given “to those individuals and institutions that have demonstrated a lifelong commitment to freedom and democracy and opposition to communism and all other forms of tyranny,” the website says.

At this ceremony, the foundation awarded the medal to Mart Laar, Estonia’s first prime minister after the country’s independence from the Soviet Union. The award was accepted by Estonia’s deputy chief of mission, Marki Tihhonova-Kreek, as ill health kept Laar from making the trip to Washington.

In his acceptance remarks, Laar wrote that Estonians “know precisely what communism is. This is why our task is not to let it happen again. This demands that we all keep memory alive.”

Landsbergis’s keynote address struck a different tone. He began, “Ladies and gentlemen, dear friends, combatants.” Landsbergis, the first head of state of a Lithuania freed from Soviet domination, spoke as one warrior to other warriors.

For him, communism is alive. It is a “monster” or a “plague” that seeks to destroy “all of humanity.”

While one might be pardoned on a sunny morning in Washington for feeling far from these terrible things, Landsbergis warned, “The epoch of mass extermination is not yet over.”

Landsbergis sees the evil of communism mutating and appearing in new forms. Murderous Islamists and what he called Russo-fascism are new faces of an old enemy.

“The mixture of speculative communist teaching and fanatic delirium,” Landsbergis said, “goes on like an endemic illness.”

Landsbergis sees a love based on the belief in God as a way for humankind to avoid this contagion.

The climax of the morning’s events was the roll call of nations. Wreaths were presented by the representatives of 22 nations, four other governmental entities, and 30 private associations (from the union representing Voice of America employees to the World Uyghur Congress).

In the solemn ceremony, one or a few individuals would carry a wreath to the space in front of the statue of the Goddess of Democracy and briefly bow their head in respect for the many victims who have been slaughtered. The wreath would then be arranged with the others in rows behind the statue.

After the memorial ceremony ended, the foundation’s executive director, Marion Smith, reflected on the significance of the day’s events for Americans. An October 2016 poll commissioned by the foundation on America’s views on communism was an eye-opener.

Smith said the results of this poll reflected an overall failure of American education. He sized up our younger generations as having a “lack of historical awareness, a frustration or inability to participate in the free enterprise system, and then a weariness at the messiness of democracy.”

Freedom is the birthright of all humanity, and in the end, freedom will prevail.
— President George W. Bush, dedicating the memorial in 2007

Smith characterized this as “very fertile soil for dictatorship and totalitarianism.”

To respond to this situation, the foundation has several educational initiatives: seminars for high school teachers; outreach programs on college campuses, where the foundation teaches the basic facts about communism; and symposia for college professors to discuss difficult issues involving communism, socialism, totalitarianism, and collectivism. In addition, the foundation has run a series of ads in New York’s Times Square.

Next on the foundation’s agenda is to build the International Museum on Communism in Washington.

Smith said that understanding and celebrating the lives of those killed by communism “is very important for us as a society in terms of justice, of who we are.”

Remembering the victims of communism and seeking to defend others from it, even if our situation only allows us to do so with words, is essential to the American character, Smith said.

If we don’t defend “the great ideas of individual liberty and self-government” around the world, then we lose the capacity to affirm those ideas at home, Smith said.