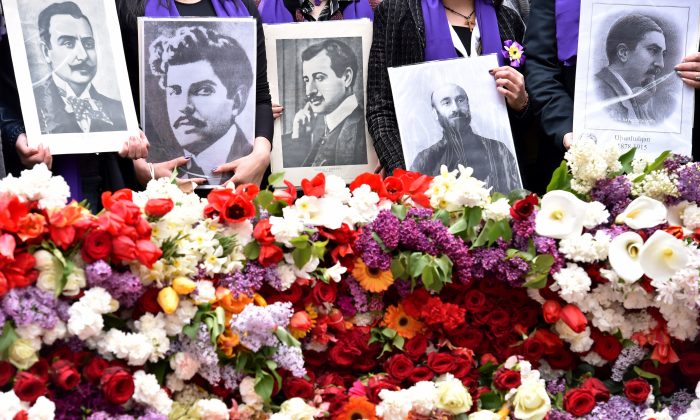 People holding photographs attend a flower laying ceremony at the Tsitsernakaberd Memorial, on April 24, 2015 in Yerevan, Armenia, as part of the Armenian genocide centenary commemoration. Armenians on April 24 marked the centenary of the massacre of up to 1.5 million of their kin (KIRILL KUDRYAVTSEV/AFP/Getty Images)
Opinion

When I was a child and my parents wanted to convince me to eat my vegetables, they would tell me to “remember the starving Armenians.” They would explain that when they were children and were asked to clean their plates, this is what their parents had told them.

I had otherwise never heard of the “starving Armenians,” and the injunction to remember them eventually became a little joke in our household.

Not until much later did I learn that there had been starving Armenians, and what had happened to them was no joke.

On April 24 100 years ago, hundreds of Armenia’s political, religious, and intellectual leaders were rounded up in Istanbul and then deported to Turkey’s interior, where they were executed.

This was the beginning of what is now recognized as the 20th century’s first genocide, although it occurred before the word had been invented. A lawyer named Raphael Lemkin used what was done to the Armenians as an example when he coined the word “genocide” in a 1944 book.

The nightmare events in Turkey foreshadowed other atrocities of the past century: forced marches, concentration camps, mass starvation, rape as a tool of oppression, and staggering body counts.

According to the University of Minnesota’s Center for Holocaust and Genocide Studies, in 1915 there were over 2 million Armenians living inside Turkey. By 1922, less than 400,000 had survived.

In addition to the slaughter, the Turkish government sought to erase any presence of the Armenians from the nation’s life by rewriting history books, redrawing maps, and renaming churches, schools, and monuments.

Seeking Amends and Recognition: 100 Years After the Armenian Genocide
The Man Who Coined the Term Genocide

The documentation of the atrocities against the Armenians seems irrefutable: survivors’ accounts; memoirs by contemporary witnesses, including diplomats stationed in Turkey; newspaper reports—the New York Times filed over 100 stories; and carefully researched histories.

To this day, though, the Turkish government denies the Armenian genocide took place.

We owe it to ourselves to remember the “starving Armenians.” By keeping alive this memory, we reinforce our common humanity, our bulwark against such horrors.