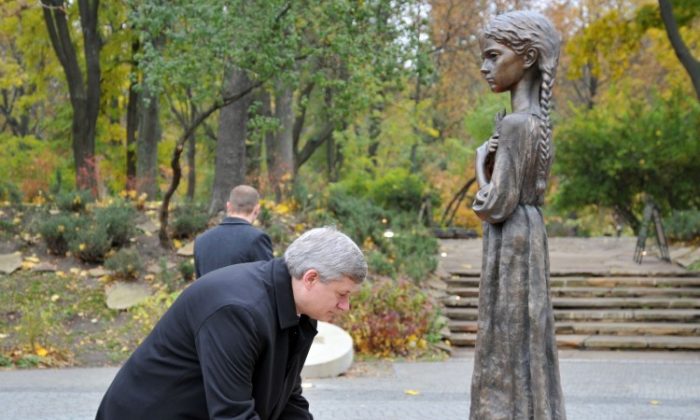 Prime Minister Stephen Harper pays his respects to the victims of Ukraine’s 1932–1933 great famine during a visit to the Holodomor Memorial and Museum in Kiev on Oct. 25, 2010. (Genya Savilov/AFT/Getty Images)
US

This year, on the 78th anniversary of the Holodomor, Prime Minister Stephen Harper commemorated the millions who perished in the “famine-genocide” in Ukraine in 1932–1933.

“The Ukrainian famine, under the oppressive Soviet communist regime of Josef Stalin, remains one of the most atrocious crimes against humanity ever perpetrated. It also reminds us of the real importance of our country’s commitment to the protection and promotion of freedom, democracy and human rights,” he said in a statement.

“Canada is home to more than one million Canadians of Ukrainian descent, many of whom lost loved ones in the Holodomor. We join with them on this solemn day to remember this sad chapter in their history that we vow never to forget.”

In 2008, Canada became the first nation to recognize the Holodomor as an act of genocide and passed legislation establishing the fourth Saturday in November as Holodomor Memorial Day.