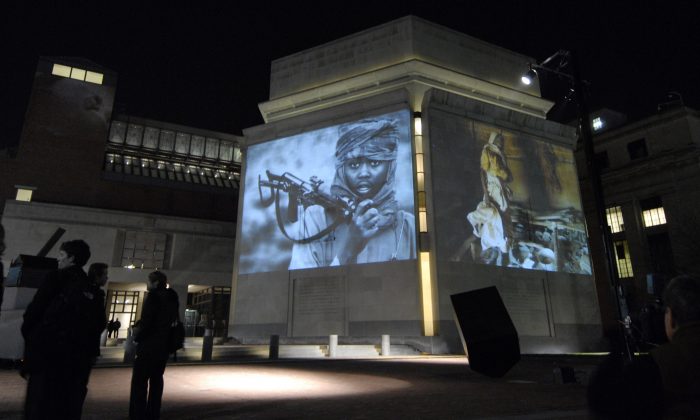 Images from Darfur and Chad are projected on the exterior walls of the United States Holocaust Memorial Museum in Washington, Nov. 20, 2006. (AP Photo/Nick Wass)
International

“Never again” is the steady mantra passed on from Holocaust survivors in World War II to succeeding generations in hopes of freeing the world from future genocides. The Nazis, who controlled most of Europe during the span from about 1939 to 1945, and their collaborators perpetrated the extermination of 6 million Jews and millions more—Gypsies, homosexuals, Catholics, the physically and mentally disabled—who didn’t fit the Aryan picture of a superior being.

Much has been etched into the public awareness via literature and film about what the Nazis called the “Final Solution,” the quintessential act of barbarism. The memoir “Night,” by Ellie Wiesel, awarded the Nobel Peace Prize in 1986, chronicled the terrors of his adolescence in concentration camps. Steven Spielberg’s “Schindler’s List” was based on the real-life heroism of one man who risked his life to save persons from death.

As the Holocaust fades into time, keeping the flame of genocides alive lest history repeat itself is a taxing load, say some prominent figures.  One strong voice is Samantha Power, U.S. Permanent Representative to the United Nations and Pulitzer-Prize author of “A Problem from Hell: America and the Age of Genocide,” a study of U.S. foreign policy as it relates to genocide. In the last 60 years, the stance of “never again” seems to be supplanted by “again and again,” she claims.

Ms. Power’s book examines the gap between lip service for prevention and the reality that genocides still occur. To wit, since the war, exterminations of masses of humanity involve Cambodia, Iraq, Bosnia, Rwanda, and Kosovo. From 1992 to 1995, Muslims in Bosnia were herded into concentration camps, where women and girls were systematically gang-raped and other civilians were tortured, starved and murdered.  In just one month—April 1994—up to one million ethnic Tutsis in Rwanda were hacked to death by machete by their ethnic rival, the Hutus. Presently both Turkey and Syria are accused of committing genocides.

“When it comes to genocide, the wiping out of thousands and millions of citizens of a race or ethnicity, the perpetrator doesn’t necessarily stand alone in culpability,” Ms Power says. “Other nations may share the blame of complicity, or enabling, by standing by, doing nothing, knowing that a crime against humanity is being committed.”

Rory Carroll reports in the Guardian newspaper that recently declassified documents show that the president of the United States had been told of the planned extermination in Rwanda before the slaughter reached its peak. Diplomatic channels diluted the crime with the words “acts of violence,” says Carroll, “The Clinton administration did not want to repeat the fiasco of U.S. intervention in Somalia, where U.S. troops became sucked into fighting. It also felt the U.S. had no interests in Rwanda, a small central African country with no minerals or strategic value.”

On a trip to Rwanda, in 1998, President Bill Clinton apologized. “[The United States] did not fully appreciate the depth and speed with which you were being engulfed by this unimaginable terror,” he said.

For the moment, ceremonies of remembrance serve up symbolic reference. The United Nations passed a resolution in 2005 to establish International Holocaust Remembrance Day on each January 27 to coincide with the liberation of the Auschwitz-Birkenau death camps by Russian troops.  The United States established the first eight days of May as Days of Remembrance of the Victims of the Holocaust.

Last month, in Los Angeles, a annual genocide remembrance unfolded to commemorate the Armenian genocide in which 1.5 million lost their lives at the hands of the Ottoman Turks in 1916. Tens of thousands of demonstrators rallied at the Turkish Consulate. According to marchers, the goal was to get Turkey to call this dark period “genocide,” largely a symbolic gesture but it would pave the way for reparations.

The United States doesn’t officially recognize this event as genocide, though one of President Barack Obama’s campaign pledges in 2008 was to get Turkey to do so.

“Politics,” said Garo Armoudikian, of Tujunga, Calif., an activist whose SUV was plastered with messages of protest. “Not nice to offend Turkey,” he said, sardonically, alluding to the strategic importance of military installations and friendly trade with Turkey.

Congressman Adam Schiff, whose district includes Glendale, Calif., home to the largest population of Armenians in the United States, agrees that it’s time for President Obama to step up.

“For a president who knows the history so well, who spoke so passionately about the genocide as a senator and presidential candidate, and who has always championed human rights, the choice of silence and complicity is all the more painfully inexplicable,” Mr. Schiff said in a statement.

Such sentiment resonates with Ms. Power, who deems that nations need a more active place in nipping genocide in the bud. “Part of protecting against mass atrocities is preventing the conditions that allow them,” she says. “[P]reventing mass atrocities is a global responsibility.”