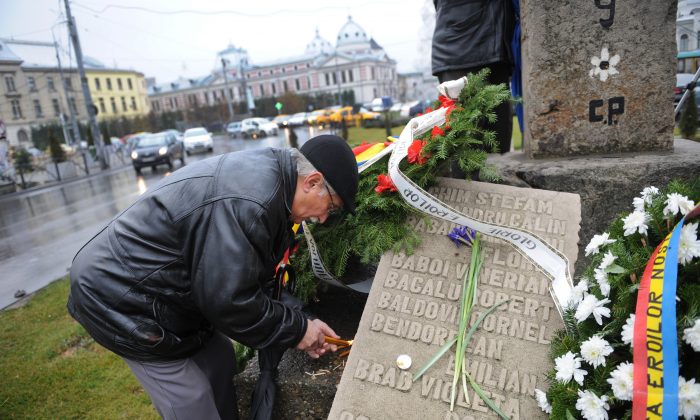 A man light candles during a commemoration ceremony in Bucharest on Dec. 21, 2011, next to a stone bearing names of people killed by communist regime forces in 1989. (Daniel Mihailescu/AFP/Getty Images)
Viewpoints

I met Mircea Brenciu on a sunny morning in a park in downtown Brasov, where he was delivering a speech to a crowd gathered to commemorate young Romanians who were killed on that spot during the anti-communist revolution of December 1989. The victims were all buried in the park and a large cross remembered their sacrifice in the fight against communism.

Brenciu, a distinguished author hailing from a family of writers, directed me to the tomb dedicated to a hero who immolated himself in protest of Nicolae Ceausescu’s oppressive communist regime.

Faceless and often nameless heroes are buried in native and foreign lands, their ultimate sacrifice quickly forgotten by the collective memory of their brethren. Occasionally, a hero’s name is remembered—often when he has committed such a solitary act of bravery and courage that it defies description.

Brenciu dedicated his book “The Martyr” to a hero whose self-sacrifice on March 2, 1989, in the neighborhood of Poiana Brasov, helped bring about the end of a brutal communist regime. Yet he is largely unknown today, both to his own people and to the West.

Prior to the “fall” of communism, “Securitatea [the dreaded security police] had ears everywhere. Even when you were quiet, you were a suspect,” Brenciu said. “Many of the torturers of yesterday and their replacements can be found today in key political, social, cultural, and especially financial positions.” It is therefore easy to understand why there is no mention of the most tragic Romanian martyr, he said.

A monument is located a few feet from an Orthodox wooden church in Poiana Brasov, in a meadow where Babes paid the ultimate price to bring attention to the plight of the desperate Romanians living under the boot of communism. A metal cross at the bottom of the ski slope is a reminder of the location where the tragedy unfolded. There is also a street in Brasov that bears his name.

Babes (1942–1989) made the ultimate sacrifice on March 2, 1989—nine months before the December revolution that toppled Ceausescu’s brutal communist regime—when he set himself on fire on a densely crowded ski slope in Poiana Brasov, where Western tourists were vacationing. He aimed to raise awareness of the atrocities committed by Ceausescu and his communist goons.

Brenciu recounts in his book how, in a cathedral-like stillness, the horrified crowd took in the sight of a skier on fire, gaining speed, not making a sound, as the smell of burnt flesh filled the air. Babes fell at the bottom of the slope, his body licked by flames fed by oxygen and his gasoline-soaked clothes. With energy from God, from underneath his smoldering clothes, he pulled out a sign that read, “Stop Murder! Auschwitz=Brasov.”

Brenciu described how two Scottish tourists, who happened to be close to where Babes collapsed, covered his smoldering body with coats in an attempt to put out the flames.

When the ambulance arrived, Babes was still alive, his breath labored and barely audible. According to Brenciu, men dressed in white—but with police uniforms underneath—brought a stretcher and shooed the crowd away with menacing looks.

They were not there to help ease the immense suffering of the dying skier; they were there to cover up the incident. They announced loudly to the crowd that this man was mentally ill, that there was nothing to see. But the yellowed paper sign Babes carried with him said clearly why he had immolated himself.

“One of the residents of the concentration camp called Romania broke the silence, but the price was his personal sacrifice,” said Brenciu.

One can only imagine the final indignities Babes was made to suffer while in custody, for daring to destroy the harmony of Poiana Brasov—of the false image, created for foreign tourists, that Romanians lived in excellent conditions under Ceausescu’s “most humane and wise political regime possible.”

The sad reality is that 29 years after the fall of communism, the majority coalition in the Romanian Parliament is the Social Democrat Party (PSD), old communists and young people who were brainwashed to support “global citizenship” by nonprofits that flooded the country in 1990. PSD organizes picnics with food and beer for potential voters, who also accept money and disposable cell phones as a type of “walking around money” in exchange for their votes.