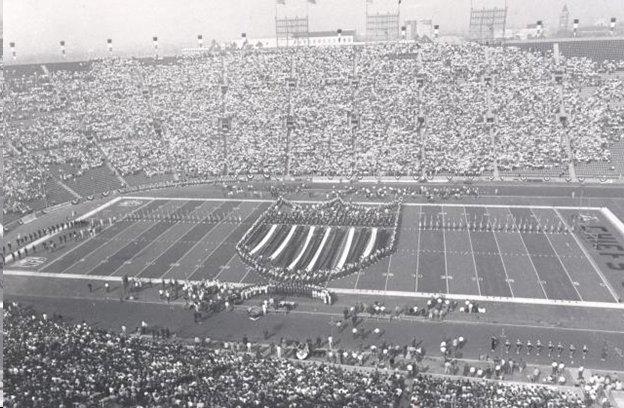 The first Super Bowl was played at the Memorial Coliseum in Los Angeles. (Photo provided by author)
12- OBSOLETE

”The most fun thing was watching the development of the Super Bowl because the game is what it’s all about. I really felt a high at every Super Bowl with all the glitz and the spectacular halftime shows.” – Pete Rozelle

The big news just announced by the National Football League is that the fiftieth Super Bowl will not be designated by a Roman numeral. It will simply be Super Bowl 50. That is an incredible change of pace and will save lots of us the trouble of counting on our fingers tracing to figures things out.

Back in the day things were still much simpler—if more boring.

The following flashback serves as a brief preview of my scheduled 2015 opus on the first Super Bowl—working title: WHEN IT WAS JUST A GAME.

The merger of the American Football League and the National Football League led to the need for a championship game. The first contest was played on January 15, 1967. The NFL’s Vince Lombardi Green Bay Packers squared off against the AFL’s underdog Kansas City Chiefs coached by Hank Stram.

That first Super Bowl was played at the Memorial Coliseum in Los Angeles before 61,946. Yes, there were many empty seats—the first and only time the legendary event failed to sell out even with ticket prices that topped out at $12.

The contest was officially known as the AFL-NFL World Championship; however, its unofficial name—the Super Bowl—was used by media, fans and players.

According to Lamar Hunt, Jr., whose dad owned the Kansas City Chiefs and was the force behind the creation of the AFL, the high flying name came about at an owner’s meeting centered on what to call the game.

LAMAR HUNT, JR: I remember showing my dad the Super Ball, the “whammy” super ball and saying, “Hey look, this will bounce over the house, this ball.”

You know, my dad was not going to be preoccupied with toys that were given to children. You know, he might have bounced the ball. We just remember demonstrating it.

But then what happened going forward is my dad was in an owner’s meeting. They were trying to figure out what to call the last game, the championship game. I don’t know if he had the ball with him as some reports suggest.

My dad said, “Well, we need to come up with a name, something like the “Super Bowl.”

And then he said, “Actually, that’s not a very good name. We can come up with something better.”

But “Super Bowl” stuck in the media and word of mouth.

It kind of came out of my dad’s mouth. What do you want to call it? Power of suggestion or just an idea or whatever, it stuck.

The first Super Bowl witnessed the first dual-network, color-coverage simulcast of a sports event in history, and attracted the largest viewership to ever see a sporting event up to that time. The Nielsen rating indicated that 73 million fans watched all or part of the game on one of the two networks, CBS or NBC.

In actuality, the game was a contest between the two leagues and the two networks. CBS’ allegiance was to the NFL. NBC’s loyalty was to the AFL – a league it had virtually created with its network dollars.

The networks charged $42,000 for a 30 second commercial. Frank Gifford was a sidelines reporter for CBS. Ray Scott handled the CBS play-by play for the first half while Jack Whitaker took over in the second half. Curt Gowdy and Paul Christman handled the NBC telecast.

There were many oddities and talking points about that first game.  Two jetpack pilots shook hands at the 50 yard line after landing there. Commercials for McDonald’s (then boasting of “Over Two Billion Served”) and Muriel cigars (“So much more cigar for just 10 cents”) were all the rage.

According to NFL Films President Steve Sabol, Commissioner Pete Rozelle had wanted to call the game “The Big One.”  That never came to be. Neither did “Pro Bowl, another name the NFL head man favored.

From the start (but not in that first game) there were unique  features to the Super Bowl including its designation with a Roman numeral rather than by a year – a move attributed to NFL Commissioner Pete Rozelle to give the game class and continuity. That began with the third championship game played in 1969.

Max McGee of the Packers became an interesting footnote to Super Bowl history in the first Super Bowl..

“I knew I wouldn’t play unless (Boyd) Dowler got hurt,” he said later.  So McGee went out on the town the days (and nights) prior to the game. Curfews, it seems, were there for him to break.  Then, the unimaginable happened. Dowler suffered a separated shoulder throwing a block on the opening series.

In came McGee who had caught only four passes all season. He snared 7 passes for 138 yards, hauling in the first touchdown in Super Bowl history—a 37-yard pass from Green Bay’s Bart Starr. He caught another at the end of the third quarter for a 13-yard touchdown. Elijah Pitts ran for two other scores. The Chiefs’ 10 points came in the second quarter, their only touchdown on a 7-yard pass from Len Dawson to Curtis McClinton.

McGee stole the show and set a pattern that would be part of the ultimate game’s history of unlikely heroes, strange twists of fate, footballs taking a wrong bounce for some teams, the right bounce for others.

Quarterback Bart Starr was the first Most Valuable Player leading the Packers to a 35-10 victory over KC. Starr completed 16-of-23 passes for 250 yards and three touchdowns.

Today more Americans watch the Super Bowl than vote in presidential elections. Municipalities vigorously and ruthlessly compete for the rights to host a game and then work with the NFL, advertising and talent agencies, merchandisers, security personnel, and celebrity party planners more than a year in advance fine tuning myriad details.  A couple of million large-screen TVs are purchased weeks before the game.

The grandest and gaudiest  annual one-day spectacle in American sports, Super Bowl Sunday has become an unofficial American holiday  with bragging rights to millions of  parties, betting pools, excessive consumption of food and drink.  TV networks charge millions for a 30-second spot. Many viewers do not even watch the game itself, content to partake of the elaborate pre-game or halftime entertainment.

It is all a mind boggling situation very different from 1967 when the Chiefs and the Packers clashed.

Harvey Frommer is in his 39th year of writing books. A noted oral historian and sports journalist, the author of 42 sports books including the classics: best-selling “New York City Baseball, 1947-1957″ and best-selling “Shoeless Joe and Ragtime Baseball,” his acclaimed Remembering Yankee Stadium was published in 2008 and best-selling Remembering Fenway Park was published to acclaim in 2011. The prolific Frommer is at work on WHEN IT WAS JUST A GAME, AN ORAL HISTORY OF SUPER BOWL ONE.