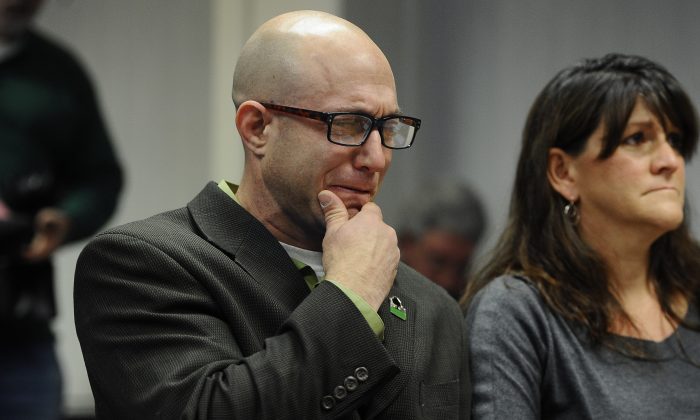 Days ahead of the Sandy Hook Elementary School shooting anniversary, advocates and lawmakers in front of City Hall on Thursday called for stricter gun laws.

On Dec. 14, 2012, 20 first-grade students and six school staffers in Sandy Hook Elementary School were shot and killed by Adam Lanza.

A gathering of concerned New Yorkers, including relatives of victims of gun violence, stood on the steps of City Hall, urging State representatives to pass enhanced gun safety laws aimed at protecting children.

Participants were hoping to draw the public’s attention to the impact that smart gun laws have had on the safety of New York State citizens. They believe New York State can lead the country in introducing legislation that will continue to lower the state’s declining gun violence rate.

The executive director of New Yorkers Against Gun Violence, Leah Gunn Barrett, said New York has the fourth lowest gun death rate nationwide, but insists that progress still has to be made.

In an attempt to avoid a repeat of 2012’s 977 gun deaths, she wants more legislation passed, such as Nicholas’ Bill, which can protect children from the dangers of unsecured guns in the home.

Nicholas’ Bill, introduced in the State Senate this past June and in the Assembly in December 2013, will require gun owners to store their guns in a safe or other locked device. If the gun is removed from storage, the owner will be charged with a misdemeanor. If the gun removal results in physical injury or death, the owner will get a felony charge.

The bill was named after 12-year-old Nicholas Naumkin, of Saratoga Springs, N.Y., who died in 2010 after getting accidentally shot by a friend playing with his father’s gun.

“Twenty-one Thousand of the 33,000 gun deaths in 2012 were suicides. Guns in the home do not protect children. The National Rifle Association churns out pro-gun propaganda that misleads the public” Gunn Barrett said.

When asked if the bill will be difficult to pass, State Senator Daniel Squadron said “to the shame of the U.S. senate, a vote on a bill to outlaw 50 caliber weapons wasn’t even considered last year. A further three-dozen bills were requested by Democrats, which weren’t honored, thus there’s a bumpy history with the senate under Republican control. However, a state law on gun control did pass last year, which represented a bipartisan agreement on the issue.”