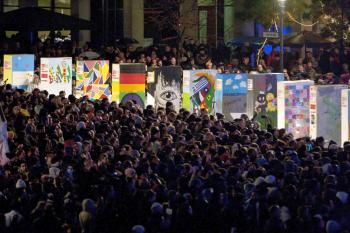 Spectators watch as giant, painted styrofoam dominoes stand along the route of the former Berlin Wall near the Brandenburg Gate on November 9, 2009 in Berlin, Germany. (Henning Schacht-Pool/Getty Images)
Europe

Remembering the Night of Historic Change

By Rosemarie Fruehauf
Print
BERLIN—While thousands crowded around the Brandenburg Gate where Angela Merkel hosted the official Nov. 9 celebration of the fall of the Berlin Wall with guests such as Mikhail Gorbachev, Hillary Clinton, and Nicolas Sarkozy in East Berlin, hundreds of Berliners celebrated the anniversary in a humble setting: the traffic bridge Bornholmer Strasse. The bridge, which was the first German Democratic Republic (GDR) border crossing between East and West Berlin, was to open permanently on the night of historic change 20 years ago.

The pressure on GDR leaders had reached its utmost extent in November 1989, yet the downfall of the wall itself came as a surprise and was triggered by a mistake of a GDR official.

A journalist asked when the law would be in effect and Schabowski said mistakenly, “As far as I know, from now on—immediately.” After the broadcast people started storming to the border crossings from East to West Berlin and demanded the opening of the gates, referring to the official’s words.

Uninformed and unprepared as the police were at that moment, they had to give way to the people—the lieutenant of Bornhomer Strasse decided at 11:30 p.m. to open the gate. His decision led to a chain reaction: The long protected wall fell and the end of communist dictatorship in East Germany.

Helga Förster was among the first people to step into the West that night. “After work around 7 p.m., somebody told me I would be able to got into the West the same night,” she said. “I didn’t want to believe it.”

The retired Forster had seen the wall built as a 13-year-old in 1961 and had since been separated from her aunts in West Germany. She lived round the corner of Bornholmer Strasse and went to the border crossing at 11 p.m., when the gate was still closed. When she later arrived on the other side the Westerners where throwing chocolates at her car.

“They where obviously as happy as we were,” she said. “It was simply joy over joy. It was a harmony that you hardly experience. Happy people. I’m sometimes sad that it is not so sunny everywhere now, but this was something that happened in my little life that I’ll never forget.” She also said she’s happy for her two daughters, that they’ll benefit from the change.

Another East Berliner, who wanted to stay anonymous, called the downfall of the wall “the greatest thing he experienced in life.”

On Nov. 9 he parked his car near the crosspoint Bornholmer Strasse and walked into the West. “It was all so crazy,” he recalled. “The police had no order and no idea what to do—this was completely unprecedented for the highly organized GDR.”

On the other side of the bridge, a taxi driver invited him for a ride. “I can’t afford it; I don’t have Western money,” he said to the driver. “Don’t worry,” the driver said. “Tonight I’ll drive you for free.”

After the historic night out he returned to his workplace in the early morning. “When I unfolded the Western paper with the headline ‘Wall falls—Berlin is Berlin again!’ in front of my uninformed boss, he angrily shouted ‘How could you dare not to wake me up when it happened?’”

Western Berliner Florian Giese was a 19-year-old student in 1989. Today he works for the German government, in the Department for Development of the New Federal Countries.

Giese was wet from rain and had hurried to the celebrations after work. “I was at a political youth conference in the West German capital Bonn that day,” he recalled. “I flew there with the intention to go to the center of political power—only to learn after returning to Berlin that night that history was taking place here at home.” After he saw TV live reports of Brandenburg Gate late that night, he and his family hurried there, too.

“When I arrived, the wall was already crowded with people walking on it. For one second I wondered how to get up there, because it was so high. Moments later I was pushed and pulled from above and standing up there myself. Today I must pay attention not to mix up my own memory with the many TV pictures we’ve seen. When I was there around midnight, the space in front of Brandenburg Gate was still empty. Single people were jumping down to the Eastern side and were chased away by GDR police. I spent about an hour there, without a camera, unfortunately—I didn’t know what I was going to see.”

David Easton from England had earned a degree in politics before he became an airline pilot. The 43-year-old Londoner travelled to Berlin just to take part in the Nov. 9 celebration. “I feel sorry that I had not been here 20 years ago, because I was too young to appreciate the full meanings of the events that were taking place. But it deeply affected Europe,” he said.

“This night was an opportunity to just see, come and look back at the way things were and also on the way people feel about it now,” said Easton.

“For the Germans even now, 20 years on, this event means different things to different people. Not like in the rest of Europe where everybody sees it as a very positive event. In Germany, I think, there are people who still have many mixed feelings about this event. And the other Europeans can’t appreciate that, because we’ve not come through it. But I was glad that I came here tonight, particularly at Bornholmer Strasse, because of the effective historic moment in time, because it was the first crossing point open.”

One could see that Easton, like many others gathered at the Bornholmer Strasse that night, connected with Nov. 9 the hope for a better future. Easton wrote on the artificial piece of wall that was put up for people to paint messages on it. “I don’t know why, [but] for some reason, I wrote my little daughter’s name.”