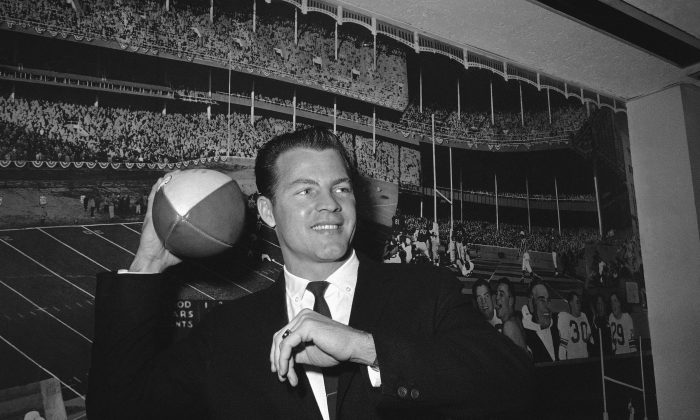 Halfback Frank Gifford cocks his passing arm as he stands in front of photo mural of the Polo Grounds at the offices of the New York Giants in New York’s Coliseum, on April 2, 1962. (AP Photo)
12- OBSOLETE

The news that one of my all-time football heroes and TV football broadcasters had passed filled me with sadness. Frank Gifford was a class act. Number 16 will be missed.

When I began work on my soon to be published When It Was Just a Game: Remembering the First Super Bowl, I reached out to Frank to do the foreword for the book and be one of the many oral history voices.

A great football hero and top notch announcer on Monday Night Football, Frank was in the booth and on the field that January day in 1967.

compelling and insightful foreword, added immensely to the depth and breadth of my book. I will always be in his debt to the kindly and considerate gentleman.

Below is the foreword by Frank Gifford that leads off When It Was Just a Game:

It was long ago and far away that I was at the Los Angeles Memorial Coliseum, a field I had played football on as a college All-American. Now I was there this January 15, 1967 in the beginning stages of what would become for me a long and highly successful television broadcasting career.

I was a member of the CBS team that along with NBC, was televising the game. That itself was something new for this newest of football games that pitted the Kansas City Chiefs of the American Football League against the Green Bay Packers of the National Football League.

No one really knew what to expect. No one expected the contest officially called the AFL-NFL World Championship Football game to become what it became—the Super Bowl, the greatest sports event in history.  No one perhaps except for NFL Commissioner Pete Rozelle, who wanted it to become bigger than the World Series.

I am one of the more than 50 oral history voices in the book talking about the game, the action and remembering my experiences with the great Vince Lombardi pre-game and post-game. You can read about those book-ended moments in the book. Pre-game was much more of a challenge as you will see than was post-game when I was there with Pete Rozelle and my former Coach “Vinny,” as he was presented with the championship trophy made by Tiffany that just a couple of years later would be named for him as the Lombardi Trophy.

In this detailed oral and narrative history, author Harvey Frommer dramatically creates a narrative arc that brings back the time. The merger of the American Football League and the National Football League, a chapter focused on the coaches, Vince Lombardi of Green Bay and Hank Stram of Kansas City, the pre-game preparations and struggles, the game itself on that sunny day in Los Angeles and a detailed look at the action on the field of play, the post-game fallout and a special chapter on what happened to many of the participants afterwards.

Through many exclusive interviews with players, coaches, media, viewers of the game, we are there reliving a special time in American sports and culture. It all makes for the definitive book on that first Super Bowl.