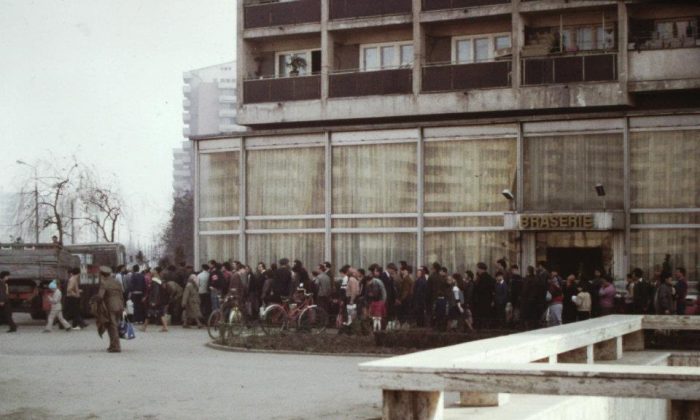 My elder aunt uses words of love to describe the menu for today. She is a gourmet cook who likes to eat and uses all the fattening ingredients she can possibly find in her pantry in order to make everything tastier, sweeter, and more buttery. Unable to walk from the pounds she put on after the fall of communism in 1989, she cannot stop buying food. Most of her pension is spent on food, medicine, and rent.

The survival mode that was etched into her brain during 45 years of communist rule is impossible to erase. People hoarded food every day because they never knew when a more severe rationing or complete scarcity would commence, and food would be hard or impossible to find.

Women carried extra cash and expandable shopping bags with them just in case something was delivered to the local stores. They could tell by the long lines forming outside, stretching around the block, that a necessity had just been delivered. People would be clamoring to buy it, shoving and cursing each other in line and pushing those who tried to get ahead.

Fights often ensued because there was never enough, and many left the line empty-handed when the food ran out. Those who were able to buy came home with a satisfied look on their faces as if they’ve won a trophy—one day of sustenance for their families.

But we were always in a state of hunger.

Children were taught patience and obedience early in life, from standing in endless lines with their moms. Dads joined in sometimes, but shopping was usually the purview of women.

Sunflower oil for cooking was hard to find, and women settled instead for the heavier green rapeseed oil. Sugar was brown and coarse, with dirty crystals. Rice was full of dirt and rocks—we had to wash it and pick out the pebbles. White sugar cubes were produced for tea but were hard to find. They were a delicacy; people with a sweet tooth would eat the sugar cubes as dessert.

People’s pantries held extra flour with white moths flying out of the packages when opened. Bread was the staple food; families consumed a loaf every day in order to fill the void of anything else.

Women carried a small book of rationing coupons that looked like stamps. When those were gone, even if you had money to purchase food, stores would not sell it to you.

Sellers on the black market made extra income with food stolen from their workplaces or traded with others. When the people are the owners of everything, nobody really cares what gets stolen because it is not really theirs; it belongs to the whims of the Communist Party.

Unless they had a severe hormonal illness, Romanians were very thin and even gaunt under communism. Westerners joked that women were beautiful because they were on Ceausescu’s diet. The dear leader even passed a decree telling citizens exactly how much food and calories they could consume per day and how much they should weigh. Perhaps it would be hard for American women to see that as a bad thing, considering they are obsessed with weight loss.

Living 20 years under this communist-enforced diet, I tired of sour vegetable soup, cabbage, rice, tea, bread, lard, and prune marmalade. I often watch Americans consume large plates of meat and vegetables that would have been the only food my family had for a whole week.

Dad’s favorite was a soup made from nettle leaves. Nettles were abundant in the woods. Mom would injure her hands picking this stinging plant. When she plucked at the plant with her bare hands, the hairs on the leaves, acting like hypodermic needles, would inject histamines that caused an unpleasant stinging sensation and itching on contact—a small price to pay to have something to eat.

When we ran out of everything, Grandpa would rescue us from starvation, cycling over five miles from his village to our apartment in town to bring us a live chicken, a few eggs, butter, and cheese.

Even a wrinkly potato was a welcome sight when I returned from school at lunch. I could at least boil it and eat it with salt, or fry it if we had oil. Communist schools did not have cafeterias and did not feed for free, nor transport children to and from school.

Most Americans today don’t understand what it’s like to starve or wait in line for food and return home empty-handed with a growling stomach after smelling fresh-baked bread. The younger generations are too far removed from the Great Depression and the soup kitchens of Herbert Hoover’s administration (1929–1933).

I’ve always cautioned my Che Guevara T-shirt-wearing students who express their love for communism: Be careful what you wish for, because reality may be quite different from the romanticized version your clueless teachers describe, when they themselves have never lived a day under the boot of communism.