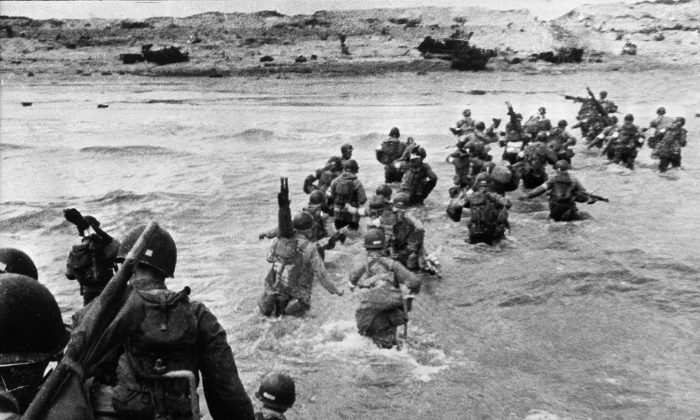 America, and all dedicated to freedom throughout the world, must reverently pause on Friday, June 6, the 70th anniversary of D-Day. On D-Day, good triumphed over evil and the end of World War II began.

D-Day’s anniversary recalls the Western Allies beginning the Invasion of Normandy to free mainland Europe from Nazi occupation. Despite suffering heavy casualties, the United States and Allied Forces were victorious. America and its allies liberated millions of innocent people being oppressed and murdered by Hitler and the Nazis.

“Soldiers, Sailors, and Airmen of the Allied Expeditionary Force! … The eyes of the world are upon you. The hopes and prayers of liberty loving people everywhere march with you … you will bring about the destruction of the German war machine, the elimination of Nazi tyranny over the oppressed peoples of Europe, and security for ourselves in a free world. … The tide has turned! The free men of the world are marching together to victory! I have full confidence in your courage, devotion to duty, and skill in battle. We will accept nothing less than full victory!…”

D-Day reminds us of the true meaning of character—individuals who laid down their lives for others and in doing so saved the world.

These heroes must be eternally honored.

It is not enough to commemorate D-Day by reverently pausing. We must ignite transforming action and rehabilitate the nation.

Here are some timeless leadership lessons of this epic historical event so critical for America today.

D-Day gives us appreciation of America’s industrial capacity and can give us the courage to transform it.

According to historian Stephen E. Ambrose, during the D-Day invasion and in the days afterward, American GI’s were better equipped than their foe because our vehicles were superior. Germany could not compete with America’s two-and-a-half-ton truck or the jeep.

American factories were across the ocean from Normandy while German factories were close at hand. Yet, America received more vehicles and better designed ones to the battlefield in less time.

The current General Motors scandal—delaying a recall of defective ignition switches for years, resulting in injuries and deaths—dishonors America. The company was recently fined $35 million by the U.S. Department of Transportation. GM failed the nation because they failed to fix a preventable and inexpensive problem.

Our nation must again represent the highest standards of manufacturing that proudly proclaims “Made in America.”

World Is a Family

The world is a family with each person of every nation deserving of dignity, respect, and protection.

America must forever remain faithful to its legacy of compassion for the vulnerable and oppressed. Whenever there is human suffering at home or abroad, America must respond with moral authority in both word and action.

America must reclaim its communities from the appalling culture of violence.

America’s character led to the reclaiming of the tranquility for countless millions on distant shores through the heroic events that began on D-Day.

Our nation can and must also bring security to communities throughout our homeland by rehabilitating the character exemplified on D-Day and, in doing so, reawaken the nation.