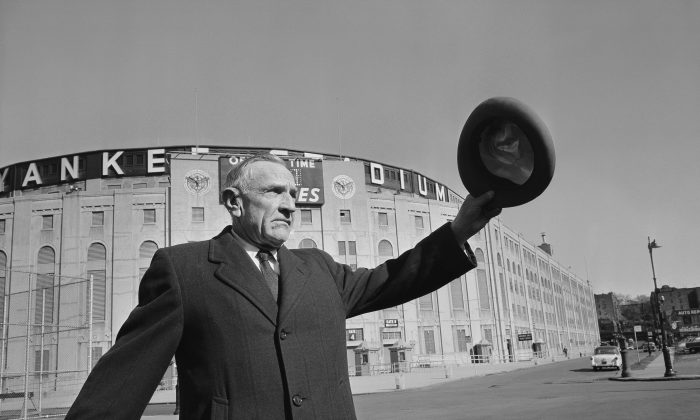 With a wave of his hat, in this Oct. 11, 1957 photo, New York Yankees manager Casey Stengel leaves Yankee Stadium in the hands of the New York Giants football team until next season. The previous day the Yankees had lost Game 7 of the World Series to Lew Burdette and the Milwaukee Braves. (AP Photo)
12- OBSOLETE

Time flies in life and especially in baseball. There is always the “next big thing.”

Lest we forget, there was once Charles Dillon Stengel, a piece of work, bigger than life, bigger than baseball.

In the dozen years he managed the Yankees, when the team was at home, Stengel lived with his wife Edna at the swanky Essex House in Manhattan. The love of his life, Edna was a former silent screen star, a high-fashion dresser who picked out all her husband’s clothes, and a sophisticated woman who kept the accounts for the Stengel bank (her family owned a bank in Glendale) and the oil profits.

The tips Stengel gave at the Essex House were over the top because as Casey said:”I got so much money I don’t know what to do with it.”

Off season, the big house in Glendale, California was the site of happening times for Edna’s nieces and nephews and — since Casey and Edna had no children of their own — for Yankee players and their wives and children. At times there were 50 to 75 children

“It was real Yankee family back then,” Yogi Berra said. “Casey and Edna were like a father and mother to us all.”

The big house had a Chinese room and a Japanese room and was stocked with antiques from trips all over the world.

“C’mon, Edna,” Casey would scream out in his gravelly voice.” You tell them all about the time you played with Hoot Gibson” (silent-screen star). And Edna would reminisce patiently about her times as an actress and also about the trips she and Casey had gone on.

“When we won the World Series in 1949 and came to spring training the next year,” Eddie Lopat told me, “Stengel told us: ‘Last year is past history. We never look back we gotta go back and beat ’em again this year.'”

Stengel came to the Yankees in 1949 and was the inheritor of a team many thought of as a powerhouse. Within three years he had re-tooled it creating a totally different type of club. Instead of featuring superstars at most positions, Casey structured his team around the trio of Mickey Mantle, Yogi Berra, and Whitey Ford. The rest of the team was mainly role-players. Stengel pitted them against each other for playing time; this provided the spur that drove them to perform at their highest level whenever they were in the game.

“The fella I got on third is hitting pretty good,” Stengel explained, ” and I know he can make that throw, and if he don’t make it that other fella I got coming up has shown me a lot, and if he can’t, I have my guy and I know what he can do.”

“We had guys on the bench who could play as good as the starters,” said Eddie Lopat. “They hated to get on the bench because they knew they might not get back for three or four weeks. Snuffy Sternweiss was a regular in 1948. The next year he slipped a little, and he got hurt. In came Jerry Coleman. Sternweiss never came back. He played seven games in 1950 and they traded him off.

“When we played the other teams,” Lopat continued,”we never under-estimated them or ourselves. We played the Giants in the 1951 World Series. We were told by the newspapermen that the Giants would run us off the field, that they were hot and they had won all those games down the stretch. Casey’s attitude was our attitude. They would have to run us off the field, but not in the newspapers.

“In 1949, we played the Dodgers in the Series. We knew they were young fellows without that much experience and we could beat them. In 1952, however, we knew they were now a tough club, but we were prepared. We were taught to never underestimate an opponent no matter what anybody ever said about them.”

“Case,” former slugger Bill Skowron explained to me, “would leave us alone to get in shape in spring training. But when those last ten days of spring training came around you knew you had to be better ready to play.”

The talent just gushed to the Yankees in those Stengel years from the farm system or through trades: Jerry Coleman and Gene Woodling in 1949, Whitey Ford and Billy Martin in 1950, Tom Morgan, Gil McDougald, Bob Cerv and Mickey Mantle in 1951, Andy Carey and Ewell Blackwell in 1952, Bill Skowron, Enos Slaughter and Bob Grim in 1954, Johnny Kucks, Elston Howard. Don Larsen, Bob Turley, Bobby Richardson, Elston Howard and Tom Sturdivant in 1955. Ralph Terry came in 1956 and Tony Kubek came along in 1957. In 1958, Ryne Duren, 1959, Clete Boyer and Roger Maris in 1960.

“There was always a personal responsibility to new players coming up,” Eddie Lopat explained. “If there was some technique, some trick in hitting, fielding pitching, we could teach the young players to improve, we did it and they learned it, and if they didn’t they were gone.”

“I was astonished at the atmosphere on the team when I joined the Yankees in 1957 along with Bobby Richardson,” affable Tony Kubek said. “Jerry Coleman and Gil McDougald went out of their way to help us and we were to ultimately take their jobs. It was typical of the pinstripe loyalty, the atmosphere of everyone helping the helping the team, the atmosphere that Casey Stengel put in place.”