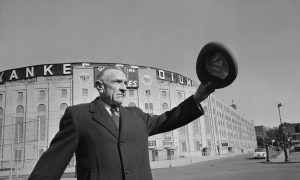 Remembering Casey Stengel: You Could Look Him Up
0
Share Now
TelegramFacebookTweetEmailTellMeWeReddit
Copy Link 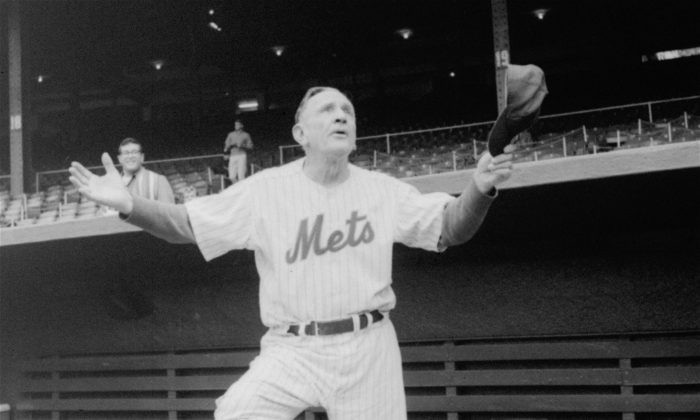 Casey Stengel, manager of the New York Mets, says farewell to the Polo Grounds September 18, 1963, which has been the temporary home of the New York club since it was formed. The Mets will move next spring into the new Bill Shea Stadium in the Queens borough of New York City. (AP Photo)
12- OBSOLETE

Remembering Casey Stengel: You Could Look Him Up (Part II)

There have been many inside baseball with a gift for gab; however, in my book no one ever beat Charles Dillon Stengel for his way with words. I was early on in my writing career going around interviewing for one of my baseball books with a letter from a publisher asking that “all professional courtesies be extended to Dr. Harvey Frommer.”

Luckily and unplanned, I came across old Case sitting (or sleeping) in the dugout. I introduced myself. He was taken by the “Dr.” in the letter.

I am not that kind of doctor,” I replied. “I am a professor.”

The “ol’ perfessor,” (he once taught) and the new one hit it off. He gave me time and memories and shooed away his regulars press guys for a bit:

“Can’t you guys see, I am doing an interview with the Dr?”

From that long ago time, I have always had a fascination with the man of many words. What fellows is just a brief batch of his bon mots and also what others said about him.

“Don’t cut my throat, I may want to do that later myself.”

“Anyone comes looking for me, tell ’em I’m being embalmed.”

“I came in here and a fella asked me to have a drink. I said I don’t drink. Then another fella said hear you and Joe DiMaggio aren’t speaking and I said I’ll take that drink.”

“I couldna done it without my players.”

“I don’t like them fellas who drive in two runs and let in three.”

“I got players with bad watches – they can’t tell midnight from noon.”

“Kid (Phil Rizzuto) you’re too small. You ought to go out and shine shoes.”

“There comes a time in every man’s life, and I’ve had plenty of them.”

“The Yankees don’t pay me to win every day, just two out of three.”

“They’re been a lot of fast men but none as big and strong as (Mickey) Mantle. He’s gonna be around a long time, if he can stay well, that fella of mine.”

“Son, we’d like to keep you around this season, but we’re trying to win the pennant.” — to a Yankee rookie

“Some of you fellers are getting ‘Whiskey Slick.'”

“These old timer’s games, they’re like airplane landings, if you can walk away from them, they’re successful.”

“About the autograph business – once somebody sent up a picture to me and I write: ‘Do good in school.’ I look up to see who was gettin’ the picture. This guy is 78 years old.”

“What I learned from McGraw, (whom he played for in the 1920s) I used with all of them. They are still using a round ball, a round bat and nine guys on a side.”

“The best thing to do is to have players who can hit right-handed and left-handed and hit farther one way and farther sometimes the other way and run like the wind.”

“They told me my services were no longer desired because they wanted to put in a youth program as an advance way of keeping the club going. I’ll never make the mistake of being seventy again.”

“There were things that would irritate Casey, but trying too hard or getting mad at sitting on the bench weren’t among them.” – Mickey Mantle

“Watch the old man. Watch how the old man keeps the guys who aren’t playing happy.” (Billy Martin to Mantle on Casey Stengel)

“After a play in the field Casey would turn (to the players on the bench) and say ‘What did he do wrong?’ or ‘You’re better than that guy.’ Either way, he’d keep them from getting stale.” – Billy Martin