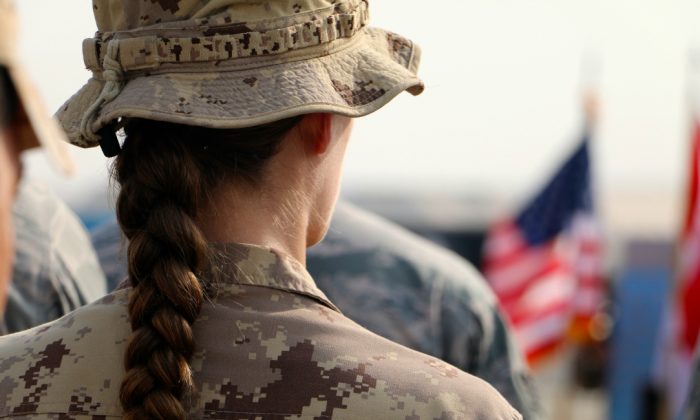 Remembering 9/11 During America’s War on ISIS

U.S. ARMED FORCES, Southwest Asia—For the 14th year in a row, a wartime U.S. military remembered the Sept. 11, 2001, terrorist attacks. But this was the first 9/11 anniversary for U.S. military members deployed as part of Operation Inherent Resolve—the U.S.-led air war against ISIS in Syria and Iraq.

On Friday, as the sun beat down at a remote desert base in the Persian Gulf region, sending the temperatures soaring well above 100 degrees Fahrenheit, military personnel from the United States and other coalition countries, including Italy and Canada, gathered inside an air-conditioned auditorium. Several deployed unit commanders gave remarks. Air Force Col. Clarence Lukes Jr., commander of the 386th Air Expeditionary Wing, went first.

“You belong to [a] generation of volunteers who chose to serve, and continue serving, in a time of multi-faceted conflicts, campaigns, and war,” Lukes said.

“You have yet to serve in peacetime operations,” he added, “only in the ever-present, no-fail mission of ensuring evil and hatred do not prevail in our world.”

There was a short video, showing scenes from the World Trade Center and the Pentagon on 9/11, including the horrific spectacle of jumpers from the twin towers, as well as short interviews of U.S. airmen, explaining the impact of the attacks on their lives and careers.

During the video, the room was silent. When “Amazing Grace” played, a few leaned forward, heads tilted down to their combat boots as they discreetly wiped wet eyes dry. Remembering 9/11 creates a uniquely powerful emotional reaction among deployed troops.

“Easily an entire generation of airmen have known nothing but what we would consider war,” Lukes said in an interview. “Part of our mission here is to stamp out the evil that we saw that day.”

The ceremony moved outside into the late afternoon heat (the event was coordinated to coincide with the time of the attacks in the United States) and gathered around a concrete and stone 9/11 memorial. The horseshoe-shaped collection of troops formed a collage of different nationalities’ camouflage patterns and head covers. The U.S. and coalition partner countries’ flags flapped in the dusty, hot wind that feels more like a hair dryer blowing on your neck than anything remotely resembling a cool breeze.

The names of 14 victims of the 2001 attacks were read. Air Force Tech. Sgt. Edward Kelly, a firefighter who joined the New York National Guard in April 2001, rang a bell for each one. Then, a moment of silence. Heads bowed in unison.

Behind the slowly flapping flags, the sun was starting to drop. Soon it would illuminate the sand-laden sky in orange, red, yellow, and countless shades in between. Interrupting the horizon were silhouettes of military aircraft parked on the nearby airfield ramp. Beyond, the endless tan desert stretched flat and unbroken as far as one could see.

After the ceremony, the different nationalities mingled for a moment to shake hands and exchange a few friendly greetings. Then they split into different directions and went back to their work, which is destroying ISIS (U.S. military personnel refer to ISIS as “Daesh”).

While 9/11 remains the most poignant reminder of the reasons behind America’s ongoing military campaigns, Operation Inherent Resolve has its own unique motivations. There is a consistent belief among U.S. military personnel about the justice of this mission and its necessity.

“We have to defeat them here to keep my wife and kids safe at home,” one A-10 pilot, a major, said. Many Air Force pilots and other coalition military personnel have chosen not to reveal their identities due to security concerns.

“Daesh is pure evil,” another A-10 pilot, a captain, said. “After seeing some of the videos, especially the one of the Jordanian pilot, I never think twice about killing them.”

The pilot was referring to Jordanian F-16 pilot, 26-year-old Lt. Muath al-Kaseasbeh, who was captured by ISIS after ejecting over Syria in December 2014. ISIS burned al-Kaseasbeh alive and released a video of his execution online.

“It’s just sad,” said Marine Capt. Steven Ritter, 33, from Miramar, California, referring to the renewal of war in Iraq after the pullout of U.S. forces in 2011.

“It’s a disgrace to all the guys who fought there,” he added.

For many U.S. military personnel, combat deployments are no longer an interruption of normal life, but a recurrent, predictable part of it. As much a marker of the passage of time as holidays. References to years are now often replaced by references to “my first Iraq deployment,” or “my third time in Afghanistan.”

In the early days of the post-9/11 wars in Iraq and Afghanistan, deployed troops would stand in line for hours to get a few precious moments on the phone or the Internet to connect with loved ones back home. Now with Wi-Fi available at even remote deployed locations, some troops limit their calls home to once or twice a week. Otherwise, some say, there’s not enough new stuff to talk about.

Islamic State’s Campaign May Be Going Chemical—Why No International Outcry?

For those with families, the revolving rhythm of home and deployed life is no longer so daunting. They’ve learned how to adapt to this lifestyle—the new normal of wartime military life.

“It’s a daily grind, balancing my mission here with my daughter’s math homework,” Lukes said. “But this is a human endeavor, and you don’t put your personal life aside while you’re here.”

Despite personnel cutbacks due to lower budgets and 14 years of continuous combat operations, Lukes said the morale of Air Force members is sustained by a belief in their mission as well as camaraderie.

“They know they’re making a difference,” Lukes said. “We’re at historical lows of manning, but we have a strong support network. And we’ll do whatever we need to do for each other. It’s in our DNA as Americans.”