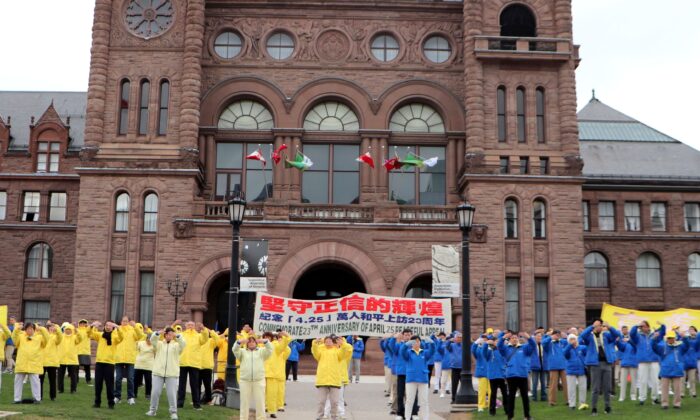 Falun Gong practitioners in Toronto gathered at the Ontario legislature on April 14 to commemorate the 23rd anniversary of a massive appeal in Beijing on April 25, 1999.

On that day, an estimated 10,000 Falun Gong practitioners gathered at the Appeals Office of the State Council in Beijing to make an appeal in accordance with the law for the release of 45 adherents who had been arrested in the city of Tianjin on April 23 and 24.

Riot police beat and arbitrarily arrested the practitioners on the heels of a slanderous article about Falun Gong published in a national magazine. Other incidents of harassment of practitioners had been happening since June 1996, when the Propaganda Ministry instructed various levels of government to criticize the practice.

Jiang Zemin, then head of the Chinese Communist Party (CCP), perceived the popularity of Falun Gong—a spiritual practice with meditative exercises and teachings based on the tenets of truthfulness, compassion, and forbearance that had around 70 million-100 million adherents by the late 1990s—as a threat to the CCP’s rule and had vowed to eradicate it.

On April 25, then-premier Zhu Rongji, the official head of the State Council, personally came out of the government compound to meet with the practitioners. A resolution was reached, and the thousands who had peacefully appealed quietly dispersed.

Roughly 100 Falun Gong practitioners gathered to commemorate what is now known as the “April 25 incident,” including over a dozen who took part in the appeal in Beijing on that historic day.

A Falun Gong spokesperson said adherents will continue to call for the end of the persecution that has continued for over two decades, while pushing for an independent probe into the state-sanctioned forced organ harvesting of Falun Gong prisoners of conscience in China.

‘The Evil Nature of the CCP’

Feng Xiumin, a Falun Gong adherent who once worked at the Tianjin Municipal People’s Government, read a statement at the rally, sharing her experience practising the meditative exercises and the CCP’s clamp-down.

“In the year of 1998, I got divorced, was laid off, and suffered from insomnia and stomach diseases. … I was helpless and in pain, and thought my life was coming to an end. It was at that time when I came to know about Falun Gong,” Feng said.

“When I began cultivation, I was not only rid of the illnesses I had suffered with, but I learned of the true purpose of life and … was spiritually elevated.”

Recalling the day of the April 25 incident, Feng said the participants were “peaceful and quiet.”

“Coming out of the April 25 incident, I came to understand the evil nature of the CCP,” she said. “I hope everyone can learn about the truth of [the incident], learn its real history, and remember those who stood in defence of the truth against the evil.”

Lucy Zhao, who was also in China at the onset of the campaign of oppression following the April 25 appeal, said at the rally that Falun Gong practitioners have pushed back against the communist regime’s persecution with peaceful and rational means over the past two decades—a period that will be remembered in history.

“The CCP has pushed itself into a corner through its persecution of Falun Gong adherents,” she said. “The righteous path of ‘truthfulness, compassion, and forbearance,’ [has] only become brighter throughout these years of severe trials.”