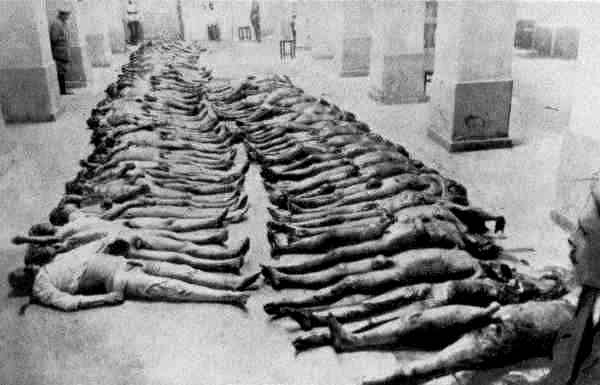 Executed victims of the Soviet Cheka secret police in 1918 or 1919 in Kiev. (Public Domain)
Europe

Remember the 100 Million Victims of Communism

Through the Memorial to the Victims of Communism and of the Resistance at Sighet, Romania, Ana Blandiana and Romulus Rusan’s efforts helped bring to light the horrors of communism. Their work began in 1993 as a true labor of love with the acquisition of the Sighet Prison, which at the time was a condemned and “insalubrious ruin,” and they petitioned the Council of Europe to open the museum.

With funds from the Civic Academy Foundation and the International Centre for Studies of Communism, the former prison became the first museum of its kind in the world, dedicated to the victims of communism in Romania and other countries within the Iron Curtain.

Political persecution of more than 2 million people used “coercive methods,” with hundreds of thousands arrested without trial, some up to 10 years. Some 600,000 Romanians were arrested and sentenced to prison between 1945 and 1989; 200,000 were deported to forced labor camps where they built communist projects.

Repression of Christian churches followed the installation of the dreaded Securitate by decree in August 1948. Farmers were forced into “collectivized” land owned by the regime and the peasants who resisted were swiftly repressed.

The former prison that now houses the museum lends to the depth of its mission. It was built in 1897 to incarcerate common criminals, and was used during First and Second World Wars for political inmates, priests, Polish revolutionaries, and Romanian deserters. Resistance fighters, peasants, and students were imprisoned there from 1948 to 1950.

Between May 1950 and July 1955, it served as a maximum-security facility, holding ministers, members of Parliament, journalists, officers, priests, and other religious leaders. During this time, 54 of those held died in custody and were buried in unmarked graves. In 1955, the prison again became a jail for common criminals. The prison was finally closed in 1975, after a decree ruled that prison sentences had to be served at work.

The actual repair effort commenced on July 1, 1996, and the Memorial was inaugurated on June 20, 1997. Since opening, the museum has had more than 1 million visitors.

Aurel Vlad’s symbolic statuary, “The Cortege of the Sacrificial Victims,” depicts humans walking in various postures of resignation, heads bowed or turned to the sky, some with hands up as if appealing to a higher power, and asking why. When it rains, the drops make the statues appear as if the condemned are crying.

Dozens of rooms in the museum tell the horrible stories of the most oppressive period in Romania’s modern history. Each cell is a painful time capsule that expresses the accounts of death and destruction of the human body and spirit caused by the most oppressive form of dictatorship in history—communism.

In Romania, the population was “Sovietized” and forced to submit to communism by purging, beatings, and confiscation of personal property. Many families lost everything, including their loved ones.

Communist organizers and Soviet agents orchestrated the transformation of the army, the police, and the justice system into the communist arms of the police state.

Teachers who opposed communism were fired and sent to labor camps; those who remained and new hires became the “new man” through violent propaganda methods, useful idiot tools of the Marxist-Leninist education based on Soviet-style textbooks.

Ethnic repression, accusations of “Zionism,” and the mistreatment of gypsies followed. Of the 44,000 people deported to the Baragan fields, 1,700 died, the oldest deportee, 95 years old, lasted until he turned 100.

Mothers, wives, and daughters of political prisoners, 4,200 of them, were also imprisoned as “dangers to the social order.” Those who gave birth in prison had their children removed and sent to orphanages.

Even high school students served time in prison for defacing/tearing up official posters and portraits, telling jokes, writing epigrams, drawing cartoons, or trying to join the partisans in the mountains.

Doctors and medical students were jailed for refusing to adopt communist jargon and not rejecting the West.

When historian Gheorghe I. Bratianu died in prison in April 1953 after 24 months of incarceration, the Interior Ministry increased the sentence of this dead man by 60 months in August 1953. (Romulus Rusan, Museum Archives and Guide, 1993-2014).

Room 9 was the cell of the famous Iuliu Maniu. It was left untouched, with the broken bed with wires sticking out from the dirty mattress. The architect of the unification of Transylvania with Romania in 1918, Maniu was the former Romanian prime minister. He died alone in his frigid cell in 1953.

Horrible details about the prison life had emerged slowly from survivors, guards, and those forced to clean the prison. They would exchange words with prisoners who were stronger and able to speak. The sick prisoners were isolated and deprived of medical treatment and human contact.

The prison’s food was not adequate to ensure survival. The communist guards hoped that inmates died quickly of malnutrition and starvation. Cardinal Iuliu Hossu wrote in his memoirs that the “soup was water with a piece of vegetable floating in it.” It was considered a delicacy to find a “hard piece of a cow’s hairy lip” bobbing in this watery soup.

Knowing that dying men and women were unable to eat, the cruel guards would give inmates extra food to taunt them. Without medical care and proper nutrition, many died of hypothermia due to the bitter cold of northern Romania.

The Sighet Museum is a living monument to the cruelty of communism and the inhumane treatment that millions of innocent people were subjected to by tyrants and their failed ideology, an ideology concocted by Karl Marx whose theories ultimately imprisoned free men, destroyed their spirit, and killed over 100 million worldwide in the name of collectivism, equality, and social justice.