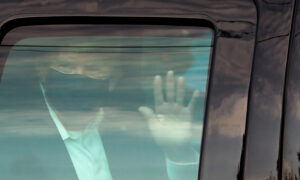 A vial of the investigational drug remdesivir is visually inspected at a Gilead manufacturing site in March 2020. (Gilead Sciences via AP)
PUBLIC HEALTH INFORMATION

Remdesivir Therapy Has ‘Little Effect’ on COVID-19 Mortality: WHO Study

Remdesivir therapy, an experimental antiviral therapy that has been used to treat COVID-19, has no substantial effect on a patient’s chances of survival, a study by the World Health Organization (WHO) has found.

The antiviral medication, developed by U.S. drugmaker Gilead Sciences, was one of a number of drugs used to treat President Donald Trump following his CCP (Chinese Communist Party) virus diagnosis earlier this month. It is among the first to be used as a treatment for COVID-19, the disease caused by the virus.

It found that the four regimens “appeared to have little or no effect on hospitalized” or reduce the duration of hospital stay or the need to ventilate patients.

“These Remdesivir, Hydroxychloroquine, Lopinavir and Interferon regimens appeared to have little effect on in-hospital mortality,” the study found.

The WHO said Thursday that its study also found that all of the treatments appeared to have little or no effect on 28-day mortality or the length patients remained hospitalized. The study is yet to be peer-reviewed.

Remdesivir was first developed as a treatment for Ebola, and works by disrupting the virus’ ability to replicate.

“We are aware that initial data from the World Health Organization’s (WHO) SOLIDARITY Trial has been made public prior to publication in a peer-reviewed journal,” Gilead told the Financial Times in a statement.

“We are concerned the data from this open-label global trial has not undergone the rigorous review required to allow for constructive scientific discussion, particularly given the limitations of the trial design.”

The treatment also reduced the likelihood of patients progressing to more severe stages of the disease where they would require new or additional oxygen support, the study found, said O’Day.

“In the largest group of patients in the study, those on low-flow oxygen, there was a significant reduction in mortality in a post-hoc analysis. In the overall population, the results showed a trend in mortality reduction,” he added.

The WHO did not immediately respond to a request by The Epoch Times for comment.

On May 1, remdesivir was granted emergency use authorization by the Food and Drug Administration, and its use has since been approved or authorized to treat COVID-19 in more than 50 countries worldwide.

The president began remdesivir therapy on Oct. 2, shortly after his COVID-19 diagnosis. White House physician Dr. Sean Conley said in a memorandum at the time that the experimental antiviral therapy was chosen “in consultation with specialists.”

The president also credited an experimental antibody cocktail treatment from Regeneron Pharmaceuticals Inc. for his recovery. Trump was able to obtain the treatment through a “compassionate use” exemption.

Regeneron’s polyclonal anti-viral antibody cocktail includes a collection of antibodies produced by B cells. The safety and effectiveness of the drug have not yet been established through clinical trials.