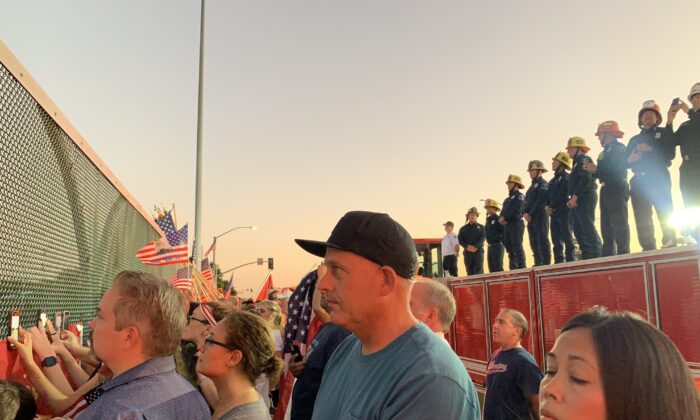 LA VERNE, Calif.—On Tuesday, Sept. 21, the body of Dylan R. Merola was returned home to California. Merola was among the dozens killed in an Aug. 26 bombing at a Kabul airport in Afghanistan.

From the airport to the cemetery, more than 10 overpasses along the way were crowded with people holding American flags to express their thanks to U.S. Marine Lance Cpl. Dylan R. Merola.

ISIS-K, an extremist group, has claimed responsibility for the Aug. 26 terrorist attack at the airport in Kabul, which resulted in the deaths of 13 American soldiers. Among them were four young marines from California, Merola, 20; Nicole L. Gee, 23; Hunter Lopez, 22; and Kareem Nikoui, 20.

Merola, from Rancho Cucamonga in California’s San Bernardino County, was a cadet in the Air Force Junior Reserve Officer Training Corps (JROTC) before graduating from high school in 2019. His body was carried in a procession from Ontario International Airport at around 5:45 p.m. to Forest Lawn Covina Hills, passing by the elementary and middle schools that he attended.

Crowds of people payed tribute by lining the procession’s route and waving American flags. It is estimated that thousands of people filled the 15-mile line on sidewalks, and planted American flags on overpasses in California’s Inland Empire to pay tribute to Merola.

Lily Brainard, who participated in the farewell, said that after hearing that 13 American soldiers had been killed, residents of nearby cities have been mourning and expressing their gratitude and respect to the soldiers who gave their lives. “This event was organized by the locals. Residents along the road participated and planted flags on overpasses early in the morning. Later, the fire department of [La Verne] and Los Angeles will also participate.”

“These are young children,” Brainard told the Epoch Times reporter. “Everyone is heartbroken, especially the parents of those young soldiers. It’s unimaginable losing your loved ones. We feel that their sacrifices were avoidable and unnecessary. We are sad and also outraged.”

“We can’t expect to comfort the grieving families; seeing [Merola] off on the overpass is the least we can do,” Brainard said while at the event with her children. “We must let our children know how to be grateful, love our country, and respect our soldiers.”

Jeff Taylor, manager of the Foothill Warriors Baseball program in La Verne, took his junior baseball team to pay tribute to Merola and his family.

“As a sign of solidarity for the family and the Marines that protect our family, … [he must] teach all of these young men [the junior baseball players] the cost of our freedom and what it takes to protect us and protect our liberty,” Taylor said.