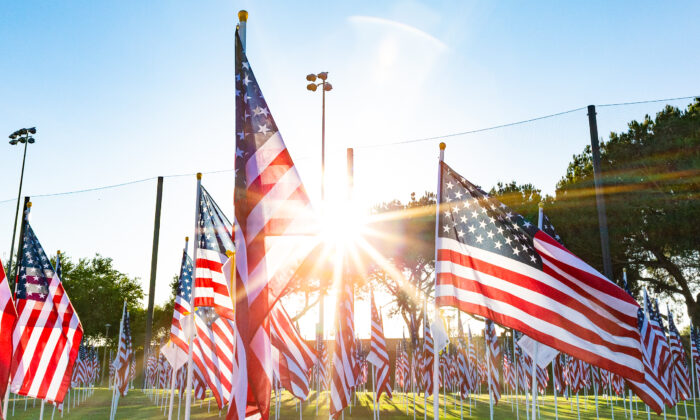 Flags are set on display at the 2020 Orange Field of Valor, in Handy Park in Orange, Calif., on Nov. 9, 2020. (John Fredricks/The Epoch Times)
Southern California

COVINA, Calif.—The body of Marine Lance Cpl. Dylan R. Merola, who was among 13 service members killed in a suicide bombing in Afghanistan, will be returned to the Southland today and carried in a procession to Forest Lawn Covina Hills.

Merola, 20, of Rancho Cucamonga in San Bernardino County, died Aug. 26 in the attack at Kabul Airport that also killed 10 other Marines, a U.S. Navy corpsman, and a U.S. Army soldier, along with more than 100 Afghanis.

Two other Southland Marines—Lance Cpl. Kareem Grant Nikoui, 20, of Norco, and Cpl. Hunter Lopez, 22, of Indio—also died in the attack.

According to San Bernardino County officials, a procession carrying Merola’s remains will depart Ontario International Airport at about 5:45 p.m.

Tuesday bound for Covina. Authorities urged residents to show their support by lining the procession’s route with flags to honor the fallen Marine.

The arrival of Merola’s remains at the airport will be a private event reserved for the family.

A public funeral service for Merola will be at 2:30 p.m. Sunday at Forest Lawn, followed by a private burial service.