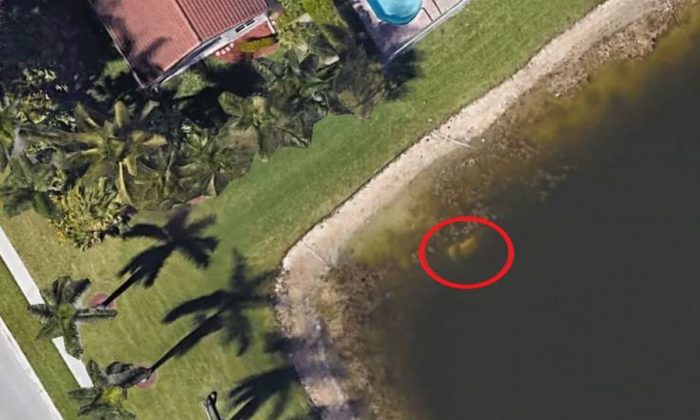 The skeletal remains of a man who went missing in the late 1990s was found inside a vehicle that was visible on Google Earth. (Google Earth - Circle added by Epoch Times)
By Jack Phillips

The skeletal remains of a man who went missing in the late 1990s were found inside a vehicle visible on Google Earth, according to a report.

His remains were recovered by the Palm Beach Sheriff’s Office from a pond near an apartment complex in Wellington, Florida, on Sept. 11.

The body of Moldt was still inside the vehicle, which was submerged in a pond. The pond and the vehicle were visible from Google Earth.

The Charley Project, an online database about American cold cases, stated that “a property surveyor saw the car while looking at Google Earth.”

“Amazingly, a vehicle had plainly [been] visible on a Google Earth satellite photo of the area since 2007, but apparently no-one had noticed it until 2019,” according to the Charley Project’s report.

On Google Maps, a white or silver car can be seen. It is still accessible via Google Maps.

The Palm Beach County Sheriff’s Office told the BBC that Moldt is said to have lost control of his vehicle and crashed into the pond.

“You can’t determine what happened that many years ago, what transpired,” police spokeswoman Therese Barbera told the broadcaster. “All we know is that he went missing off the face of the Earth, and now he’s been discovered.”

Barbera said they were unaware of reports that Google Earth was used to locate the vehicle.

According to the National Missing and Unidentified Persons System website, Moldt went missing at around 11 p.m.

“Moldt had gone to an Adult Night Club on the evening of November 7, 1997. Moldt left the night club around 2300 hours. He did not appear intoxicated and left alone in his vehicle. Moldt was a quiet man and did not socialize much at the club. He also was not a frequent drinker but did have several drinks at the bar. Moldt had called his girlfriend from the bar around 2130 saying he would be home soon, and that was the last contact with him,” it said.

It said he was seen wearing gray pants, a button-down shirt, a black belt, dress shoes, and a tie. He also was wearing “a 14 karat solid gold nugget ring” with two diamonds on one side and a topaz stone on the other side, according to the report.

The National Missing and Unidentified Persons System has said more than 600,000 people go missing in the United States every year. Some 4,400 unidentified bodies are also recovered annually.

Missing children typically fall into five categories: kidnapped by a family member, abducted by a nonfamily perpetrator, runaways, those who got lost, stranded, or injured, or those who went missing due to benign reasons, such as misunderstandings, according to the report researchers.Crime Facts in the United States.